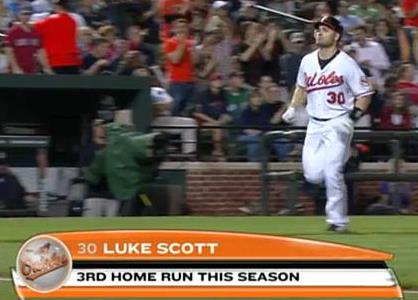 With all the recent flap about Felipe Lopez’s bat flip against the White Sox, it seems worth pointing out that he’s not the only guy doing such things this season.

Last week, Orioles outfielder Luke Scott tossed his bat with considerable verve after hitting a monster home run against Josh Beckett. This may have gone unnoticed had Beckett not tried to shout him down in the aftermath, then gotten into an argument with the umpire over it.

(Unfortunately, MLB.com’s video cuts away before the bat flip on every single replay.)

After the inning, Beckett was approached by plate ump Fieldin Culbreth, which culminated in an animated conversation during which the pitcher gestured toward the Orioles dugout. One possibility: Culbreth was warning him against retaliation. (If so, it worked; Beckett faced Scott once more in the game, retiring him on a fly ball.)

For a guy so clearly perturbed, Beckett wasn’t much in the mood after the game to deconstruct the moment with reporters.

“What is this, TMZ?” he said. “I thought we were talking about a baseball game. You want to know about bat flips and talking to umpires. I think, why don’t we just stick to the game.”

It’s a fair enough tactic. If Beckett expressed sufficient outrage it’d be all the easier to pin him with the drilling for which Scott seems destined. The one clue Beckett offered up to the press: “These things have a way of working themselves out.”

The teams next meet May 16.