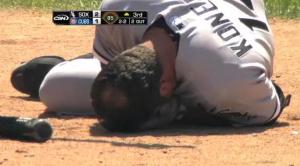 For a vast majority of baseball’s history, much was made of the difference between the National and American leagues. AL: Based on the three-run homer. NL: Prefers to sacrifice. Recently, however, decades after the adoption of the designated hitter amplified these stereotypes, uniformity slowly began to settle across baseball.

The positions of league president were discontinued after the 1999 season. League-specific umpiring crews were consolidated into a single unit, and interleague schedules devised. When Mike Scioscia led the Angels to a championship in 2002, much was made of his bringing a National League style of play to the Junior Circuit. Today, such a distinction is barely noticed.

Usually. Wrigley Field and U.S. Cellular Field are located on opposite sides of Chicago, about 10 miles apart, but they may as well be on different coasts. At Wrigley on Friday, the clearest difference between the leagues was on full display, after a Jeff Samardzija fastball ricocheted off of Paul Konerko’s face, near his left eye, in the third inning. (Watch it here.)

Even though it came under suspicious circumstances—Konerko had homered in his previous at-bat—the pitch was a split-finger fastball that didn’t break, Samardzija claimed repeatedly that it was unintentional, and the White Sox believed him.

Nonetheless, there were reparations to be collected. Sox pitcher Jake Peavy put it succinctly in the Chicago Sun Times:

When our man gets hit, gets hit in the face, there’s something to be said about that. I know this is a sensitive subject with baseball, and I’m not trying to be disrespectful, but if your big guy is going down, intentional or unintentional, there’s got to be something done about it.

Something was done, and it perfectly illustrated the difference in mindset between the leagues. Samardzija expected to be targeted for retaliation, but drilling the opposing pitcher was not what Sox starter Philip Humber had in mind.

The reason is obvious. Because pitchers don’t hit in the AL, retaliatory strikes must be directed at the opposing club’s big hitters. Sure enough, the first pitch of the fourth inning sailed behind the Cubs’ biggest threat, Bryan LaHair. It was clearly intentional, and plate ump Tim Timmons quickly issued warnings to both benches. (Watch it here.)

Even if Humber intentionally missed LaHair, his choice of target was peculiar, because Samardzija had been the next Cubs batter in the bottom of the inning after Konerko went down. Not only wasn’t he targeted, but he reached base on an error by shortstop Alexei Ramirez.

Perhaps Humber failed to consider retaliation in that moment, and was reminded between frames that it might be a good idea. Or maybe he had his sights set on a bigger bat, but with a runner, Samardzija, on first and nobody out, he opted against putting anyone else on base, waiting a frame to go after LaHair.

Phil Rogers of the Chicago Tribune talked to Robin Ventura about the situation:

I asked the White Sox manager if there was a purpose to the 91-mph fastball that sailed behind LaHair’s head on its way to the Wrigley Field screen.

“No,” said Ventura, who then turned his brown eyes on me for what seemed a long time, not blinking.

I asked him if the pitch was one that just got away from Humber.

Rogers also reported that Ventura said the White Sox would have hit Samardzija directly if they thought his pitch to Konerko had been intentional.

Either way, Peavy and A.J. Pierzynski were caught on camera after the fourth inning having an animated discussion in the dugout—possibly over retaliatory protocol. Peavy, of course, spent the bulk of his career in the National League; Pierzynski has spent 14 of his 15 big league seasons in the AL, and Humber has been an AL guy almost exclusively .

Did the discussion highlight differences of opinion and experience? Nobody’s talking of course, but the fact remained that at least one guy was expecting something a bit more severe.

“I was ready for it,’’ said Samardzija in the Sun Times. “No worries. Sometimes you deserve it.’’