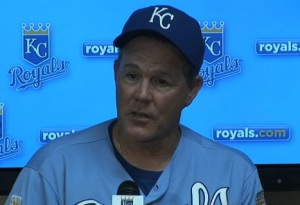 Rex Hudler is a throwback. Well, not actually a throwback, since he was drafted in 1978 and retired 20 years later, but he’s long harbored an old-school ethos that mandates ballplayers play hard, rookies keep quiet and, among other things, one doesn’t get friendly with one’s opponents.

That he’s now a broadcaster for the Kansas City Royals has not dimmed his moral compass as far as baseball is concerned. Calling games for the Angels in 1999, his first season behind the mic, he responded to an on-field fracas with the Indians by looking into the booth next door and deciding that he should uphold his team’s honor by brawling with Cleveland broadcaster Rick Manning. (He was eventually talked down by partner Steve Physioc.)

Hudler has since learned the limits of his role (fighting with colleagues = bad), but he’s not shy about explaining what the Code should look like on the field. It helps that his partner in the Kansas City booth, Ryan Lefebvre, shares many of his ideals. A pet peeve of theirs that recently garnered attention is the aforementioned fraternization between players on competing teams.

As reported by Fox Sports Kansas City, Hudler and Lefebvre jumped all over it:

Lefebvre: “I don’t want to get on my soapbox again, but if I’m a pitcher, I think it would really burn me to see my middle infielders laughing and joking with a guy who just hit a three-run double off me as he stands on second base. I don’t get it. And I’m not saying the Royals are the only team that does it. You see it a lot more these days. If I’m a pitcher, I wouldn’t want to see my guys doing it. I mean, what could be so urgent that you’d have to talk to the guy on the other team who just hit a potentially game-winning hit? Maybe it’s just me. Maybe I’m getting old.”

Hudler: “You’re not old. Age has nothing to do with it. It’s something I see as well. But it’s a culture that’s not going to change unless some of the veteran guys see to it. Or management says something about it.”

This was not the first time the topic has come up during a game. Hudler later went on Kansas City radio station WHB and said, “You can stand 10 feet away from a player and smooth out the dirt and still talk to a player without giving the appearance that you’re in his back pocket. When you’re in uniform out there, respect the game of baseball and respect your teammates. And stay out of the back pockets of opponents when people are watching. It makes me want to vomit. Escobar is as guilty as any of them. But I don’t think he knows. It’s up to the veterans on the Royals or even Ned (Yost) to cut some of that stuff out.”

To this point, this story is barely newsworthy beyond a couple of old-school broadcasters having opinions. It’s what happened next that proved revelatory: Royals manager Ned Yost seemingly pivoted, and agreed with them.

According to Fox Sports, Yost called a clubhouse meeting during which he addressed the issue. According to team spokesman Mike Swanson, “we’ve seen the last of [fraternizing on the bases.]”

There are a few things going on here. Foremost are the attempts by Hudler and Lefebvre (who is the son of former big leaguer Jim Lefebvre) not just to describe an old-school baseball mentality, but to criticize current players for failing to embrace it. That’s their job, if they see it that way, and the fact that the repeat offenders in Fox’s account hail from Venezuela and Cuba, respectively, could speak to the fact that the game they learned contains no such tenets, and it would take an old-school clubhouse leader to inform them of same.

Much more interesting, however, is Yost’s apparent willingness to bend to the broadcaster’s wishes. Yost spent six seasons in the big leagues, and is in his ninth campaign as a major league manager. He knows baseball, he knows the Code and he’s seen every Royals game this year. If the chattiness of his infielders hadn’t gotten on his nerves before now, he has no business changing course simply because team broadcasters called for it.

Had Yost been leaning that way anyway, and the broadcast team simply pushed him over the edge, it merits questioning just how dialed in he is to what’s going on with his team.

There’s a place in baseball for the old-school. It seems to be shrinking by the day, but it’s there, and guys like Hudler and Lefebvre should be commended for doing what they feel they must to uphold it.

That said, it’s 2012, and the game is different than it was in 1992 or 1972 or 1952. That’s the nature and the beauty of the unwritten rules—they’re malleable to their era, and change with every generation. If Ned Yost is willing to allow some in-game chatter between his players and their opponents, that’s his right. Last week’s episode illustrates mainly that he needs to figure out on which side of the Code he comes down.

Update 8-05: Well, at least Yost doesn’t have to worry about Betancourt chatting up opponents any more.

One thought on “Chatty in Kansas City: How Does Yost Feel About Fraternization, Anyway?”