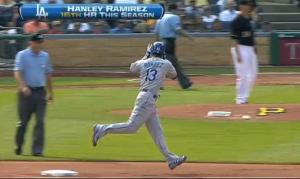 Thursday, the Dodgers should have known better when it came to dealing with umpires during their game against the Pirates. They didn’t, and it cost them.

In the fourth inning of that same game, Hanley Ramirez homered off of A.J. Burnett. Shortly after rounding second base, he made his by-now-patented “I See You” hand gesture—circles with the index finger and thumb of each hand, placed over his eyes like glasses—aimed at the Los Angeles dugout. (Watch it here.)

His sight line, of course, happened to pass close enough to the pitcher’s mound for one of two possibilities: Burnett misunderstood his intention and took the gesture personally, or the pitcher felt that an opposing player had no business participating in bush-league shenanigans while rounding the bases, intention be damned.

In either case, he’d have been correct.

“If you’re going to hit a homer, act like you’ve hit one before,” Burnett told reporters after the game. “The first batter, [James] Loney, hit one, was very professional about it. Ran hard the whole way.”

Ramirez concocted “I See You” as an update to the “Lo Viste” hand gesture he used in Florida, in which members of the Marlins hold a sideways V made with the index and middle fingers over their eyes (as seen here in a different environment.) 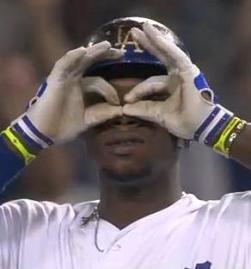 “When I got to the Dodgers, I did ‘Lo Viste’ for [former teammate Emilio] Bonifacio a couple times and it was cool,” Ramirez said in a Miami Herald report. “But then I spoke with [Dodgers shortstop]  Dee Gordon and he said, ‘Let’s do something different. You’re no longer in Miami.’ That’s when we tried to do something new and came up with this. It’s all for fun.”

At least until it ticks off a member of the opposition.

Sure enough, Burnett faced Ramirez with two outs and the bases empty in the sixth, with the Pirates holding an 8-4 lead. There would not be a more opportune moment to make whatever statement he felt necessary, but he did not act.

Then again, Burnett also passed up a similar opportunity earlier this season, despite pointing toward the Reds dugout as a means of warning that just such a thing was imminent after Andrew McCutchen was drilled by Aroldis Chapman, and Josh Harrison was hit, then berated, by Mike Leake the next day.

Reaction, of course, is not the focal point of this subject. That would be “I See You,” which is cute and which keeps things loose and which builds morale on a team in a pennant race. All of this is beneficial. To break it out on the field, in game action, while facing an opposing pitcher, however, is nothing short of inane.

Ramirez left Florida in late July in dubious standing with many of his former teammates. Getting any of his new teammates drilled for an ill-considered on-field decision won’t do much to earn him new friends in Los Angeles.