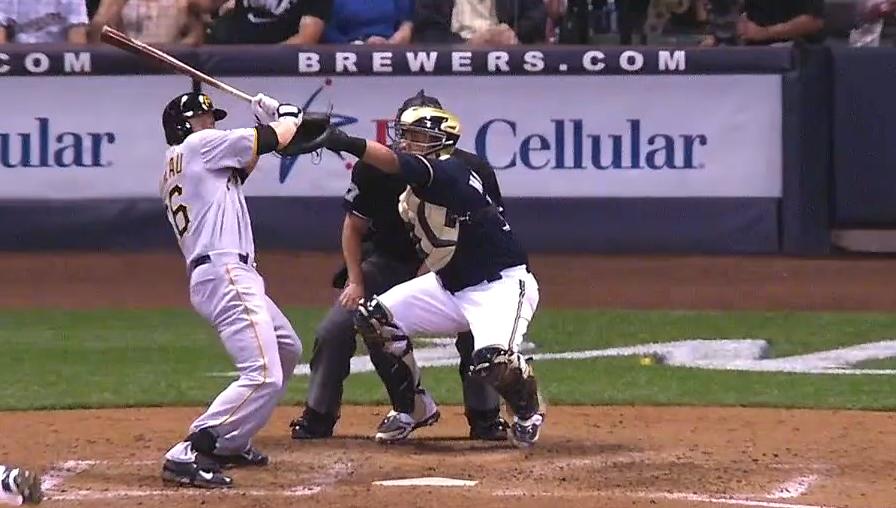 In the fifth inning in Milwaukee on Wednesday, Andrew McCutchen hit a home run to left. He didn’t get it all—it just cleared the fence—and he managed to lose it in the lights before he knew where it was ending up.

As such, he loitered in the batter’s box to try and get a read on it.

Ignore for a moment the horrific strategy of hedging one’s bet that a ball may not have left the ballpark by failing to leave the batter’s box. The pitcher who gave up the shot, Wily Peralta, either did not know about McCutchen’s confusion, or didn’t care. With his next pitch, he drilled Justin Morneau on the hand, near head-level. (Watch it here.)

“The catcher knew I was looking for the ball, the umpire knew—everybody knew it,” said McCutchen after the game, in an MLB.com report. “You could see the guys in the infield smirking as I was going around the bases. They know I’d lost the ball.”

Peralta offered up the standard denial of intent, saying “Yeah, you know, it wasn’t on purpose,” before detailing how he missed his spot while trying to go up and in.

“I know it looks bad, because right after a homer, you don’t want to hit people,” he said.

Unless, of course, hitting people is exactly what you want to do. Morneau reacted angrily, and even though he never approached the mound, benches cleared. After the game, Pittsburgh’s first baseman wasn’t ready to level blame with any degree of certainty.

“I think usually when a guy hits a home run, and they don’t like the way he reacts, they wait until the guy comes around [again],” he said in USA Today, questioning whether a more proper approach would have seen the Brewers waiting for McCutchen’s next turn in the lineup, rather than going after Morneau so quickly afterward. “It’s one of those things in that gray area. You don’t know if it’s intentional or not.”

Not to disagree too wholeheartedly with an experienced big leaguer or anything, but it seemed pretty intentional. Add the wrinkle that Morneau’s career was derailed and diminished by concussion-related symptoms, and the idea that Peralta came anywhere near his head in a misinformed fit of retaliation is unconscionable.

That was the final meeting between the teams this season so any personal retribution will have to wait, but there are no such constraints on the commissioner’s office, which may opt to hand down some discipline of its own.

One thought on “The Fine Line Between Pimping and Confusion, Pittsburgh Edition”