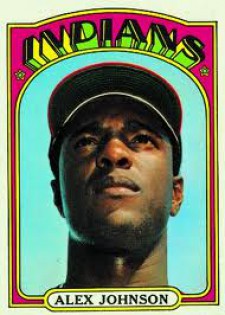 Word just came down that longtime outfielder and 1970 AL batting champ Alex Johnson passed away Saturday at age 72 after battling cancer. He was the subject of a brief chapter in The Baseball Codes that didn’t make the final cut, mostly because it neither celebrates the game nor does it do much to explain attitudes about the unwritten rules. Still, it revisits a long-forgotten incident back in the days when baseball was undeniably less constrained than the modern iteration.

Don’t carry guns in the clubhouse. This should be an obvious rule. So when, on June 13, 1971, Alex Johnson accused Angels teammate Chico Ruiz of threatening him in the clubhouse with a pistol, people’s ears perked up. It was just the latest episode in a protracted soap opera of controversy that seemed to embody Johnson’s career, but even so, this was noteworthy.

For his part, Johnson was no stranger to clubhouse altercations. He scrapped with a variety of teammates, including a drawn-out brawl with Angels outfielder Ken Berry, and was saved from a braining at the hands of teammate Clyde Wright only when other members of the Rangers raced to disarm the pitcher of the stool he was about to swing.

Chico Ruiz, however, was different. Johnson and Ruiz had been close friends since their two-year stint together on the Cincinnati Reds in the late 1960s. Johnson had enlisted Ruiz as godfather to his daughter. But in 1971, for reasons his teammates had trouble discerning, Ruiz became a target for Johnson’s barbs. It became a regular occurrence around the Angels locker room that year to hear Johnson berating Ruiz with profanity and insults.

On that June day, both players served as pinch-hitters against the Senators, and had each repaired to the clubhouse prior to game’s end. This is where Johnson claimed that things got dangerously weird. With nobody to corroborate his story, however, and with Ruiz denying everything, an already disgruntled media turned even further against Johnson. One fed-up teammate said that if Ruiz did have a gun, his only mistake was not pulling the trigger. Shortly thereafter, Los Angeles Times columnist John Hall wrote that at least three players were “carrying guns and several others are known to have hidden knives—to use as protection in case of fights among themselves.”

Three months later, in a grievance hearing to challenge the club’s suspension of Johnson (which stemmed less from his accusation against Ruiz than a string of belligerent encounters with teammates and consistent incidents of failure to hustle), Angels general manager Dick Walsh finally admitted that Johnson’s allegations were valid and that Ruiz had, indeed, waved a pistol in his direction. This didn’t do much to help Johnson’s already diminished reputation, but it managed to lend a new layer of dysfunction to the Angels clubhouse.

Ultimately, things didn’t go well for either man. Johnson played his final game of the season on June 24, then was traded to the Indians. Ruiz, after being released during the winter, drove his car into a sign pole in the early morning hours of Feb. 9, 1972, and was killed instantly. Johnson was one of the few ballplayers to attend the funeral.

One thought on “Alex Johnson, RIP”