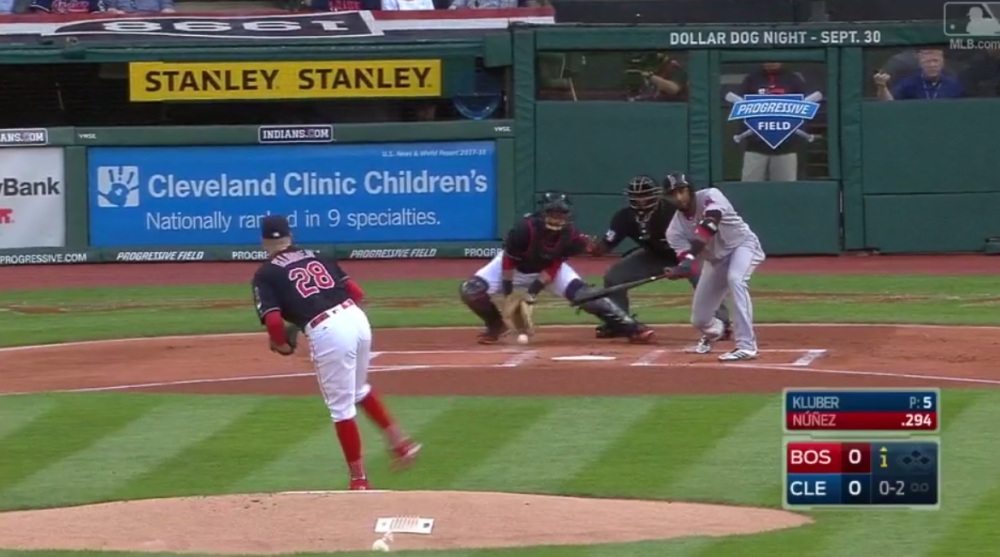 Maybe when you’re as good as Corey Kluber, you think you can get away with questionable activities.

Maybe when you’re as good as Corey Kluber, you think that your prodigious skill will help you escape any jam—even those of your own devising.

Maybe when you’re as good as Corey Kluber, it doesn’t matter to you whether or when you put opposing players on the basepaths, because you’re Corey Kluber and you’re good enough to handle your business.

Right up until the moment that you’re not.

Heading into the eighth inning of last Wednesday’s game against Boston, Kluber was pitching a gem: four hits, one run, 11 strikeouts, one walk. That Cleveland was losing 1-0 had very little to do with his performance.

Kluber got Mitch Moreland to fly out for the first out of the eighth. He whiffed Christian Vazquez—making it an even dozen on the day for the right-hander—for the second out. After a walk to Brock Holt, Eduardo Nunez came up and, with a 2-0 count, took a mammoth swing, spinning himself into the dirt as he futilely chased a 90 mph cutter. Kluber didn’t like it. With his next pitch, he drilled Nunez.

Maybe the pitcher thought it was a safe move with two outs, but Nunez bats leadoff in a high-powered offense. The next batter, Mookie Betts, drilled a single off the glove of third baseman Giovanny Urshela, bringing home Holt and padding Boston’s lead. Out came manager Terry Francona, and that was it for Kluber. Before the game ended the Red Sox had tacked on four more runs against Cleveland’s bullpen in a 6-1 victory.

From the Boston Herald:

Asked on Thursday if there was any reaction in the dugout when Nunez got hit, Red Sox manager John Farrell said, “For (a guy with) pinpoint control, you know, I think that was fairly obvious, the message (that was sent).”

Is it against the unwritten rules of baseball to swing too hard?

It was a perfect example of the line between confidence and cockiness. Kluber perceived Nunez’s swing as some sort of slight—never mind that the vast majority of his colleagues would have brushed it off as being of little consequence—and felt invincible enough to act on it in the moment. Baseball has long had an unwritten rule regulating swings at 3-0 pitches (only the reddest of asses in big league history even considered 2-0), but that applies only in blowouts, which this game decidedly was not.

Perhaps it was a lesson that no pitcher, Kluber included, is as invincible as he might occasionally think. Or maybe it was just karma. Either way, it did not end well for the Indians.