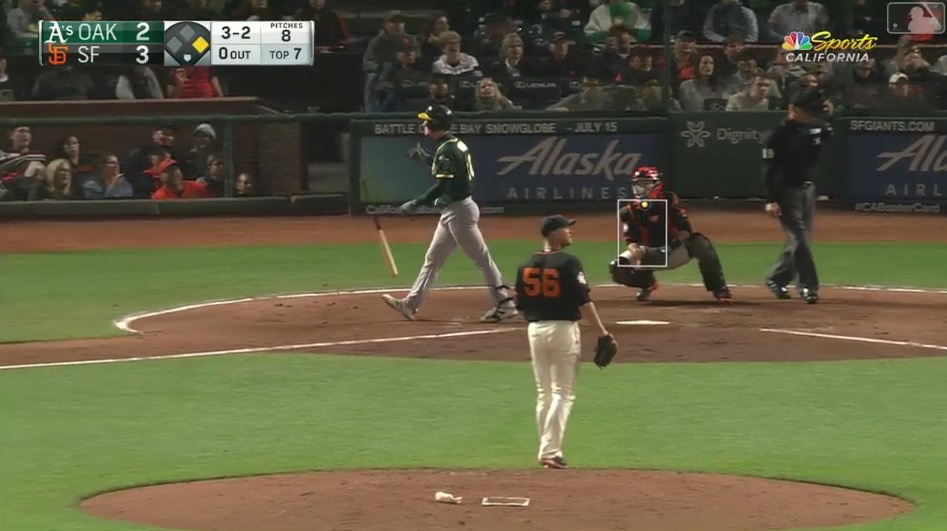 That Mark Canha flipped his bat after homering against the Giants in San Francisco on Saturday night was hardly noteworthy. It was a small affair, more toss than flip. The Giants did not appear to notice, at least so much as they let on.

It was Canha’s response to the flip, much more than the flip itself, that truly reflected the modern game.

“Growing up in San Jose and being a Giants fan and coming to all those games as a kid, it was nice to finally pop one and, given the situation, I was excited,” the Oakland outfielder told the media after the game. “So I got on Twitter and got out in front of this a little bit. I’m sure a lot of San Franciscans are offended by that, and I’m sorry.”

“You know what, people getting offended by bat flips is so silly,” Canha continued. “I’m not sorry. I’m not really sorry. It’s part of our game. Everybody does it. If someone is going to throw at me because of it, I’ve got thrown at in the past this season for bat flipping. I clearly didn’t learn my lesson. If you’re offended by that, I don’t care.”

We’ve seen comments like these before, usually from Latin America-born players, who have tried for years to explain how celebratory displays are part of the baseball they grew up with, and how they make the game better. For a certain subset of critics, however, those guys are too other for traditional tastes—foreign voices that have no business telling Americans how their sport should be played.

Mark Canha was born and raised a Giants fan in Northern California. He went to U.C. Berkeley. He now plays for the A’s. There are few better examples of a Bay Area baseball kid made good. (And, okay, maybe some of those same critics who decry foreign voices will now dismiss Canha as a West Coast liberal, as if that has anything to do with anything, never mind that the guy’s politics are closeted to the point that I have no idea what they are.)

The point isn’t that Mark Canha is trying to move the needle. It’s that he’s being honest about the fact that the needle has already moved. This is Major League Baseball, 2018, and Canha is simply a product of it.

Also intriguing is Canha’s claim that he’s been thrown at this season in response to bat flipping. There are no direct ties—series in which he homered and was subsequently drilled. The best bet is a flip against Seattle, on May 2, of which you can catch a fleeting glimpse here.) Canha skated through the next day’s game unscathed, but was drilled by Mariners starter Mike Leake the next time the teams met, on May 22.

Then again, Canha said only that he was thrown at, not hit, in which case all box-score divination is moot. I’ll be sure to ask him about it next time I’m in the A’s clubhouse.