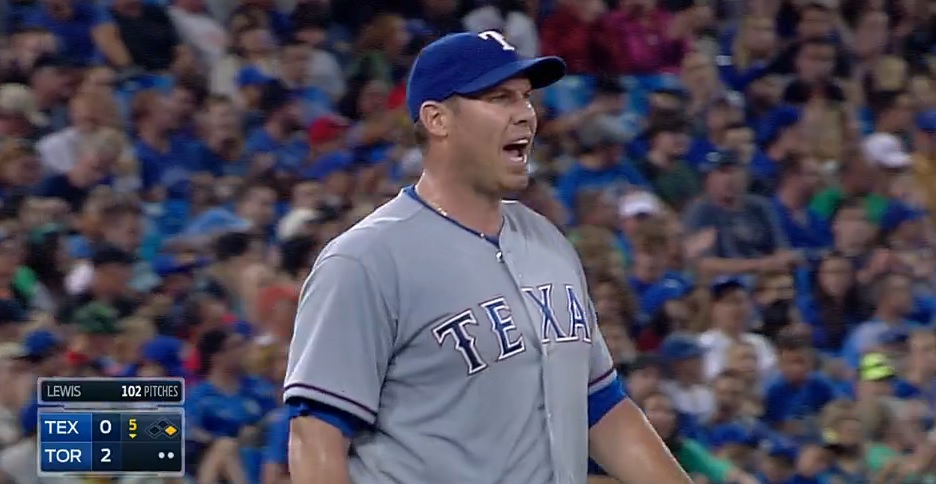 So this is what the ruination of baseball’s unwritten rules looks like. People keep marginalizing them, shunting them to the corner, labeling those who play by their merits as kooks and haters of fun. What we’re left with, at least in part, is this: Ballplayers, both red-assed and traditionalist, playing less by moral imperative than by half-formed opinions based on a system they don’t appear to fully understand.

Case in point: Rangers starter Colby Lewis, who on Saturday lit into Toronto’s Colby Rasmus (in the rare and wondrous Battle of the Colbys) for daring to lay down a bunt late in the game while the Blue Jays sat on a huge lead.

Except that it was only the fifth inning. And the score was 2-0. Oh, Colby Lewis.

The section of the unwritten rulebook that Lewis was attempting to channel was the one that dictates avoidance of running up the score late in games. It’s a simple matter of respecting one’s opponent enough to keep from embarrassing him … but that doesn’t have much relevance to whatever happened in Toronto. Just as Astros manager Bo Porter was ludicrous when he exploded over a first-inning Jed Lowrie bunt back in April, Lewis is ludicrous now.

Rasmus bunted because—here’s the pertinent part—his run mattered. Lewis was upset that Rasmus had taken advantage of a defensive shift designed to stop him from hitting. Now that such shifts are gaining traction even as the Code is losing it, we’re faced with an awkward intersection: Is there a moral component to playing straight-up against the shift with the fact that it presents an obvious weakness (nobody playing down the third base line) to exploit? The closest example I can conjure is the first baseman who plays off the bag despite a runner being on base late in a blowout game, with the expectation that the runner will hold anyway. He wants the defensive advantage of playing in the hole, and expects that his opposition will not take similar advantages of their own.

But those who think that situation is reasonable do so because of the lopsided score. In a close game, if a defense wants to gain the advantage of an extra defender on the right side of the infield, it has no business taking exception should a batter exploit that weakness. Which is not only what Rasmus did, but which is what every hitter with speed should do, at least on occasion.

Lewis had words for Rasmus on the field (watch it here) and after the game explained just what was going on. “I told [Rasmus] I didn’t appreciate it,” Lewis said in an MLB.com report. “You’re up by two runs with two outs and you lay down a bunt. I don’t think that’s the way the game should be played. I felt like you have a situation where there is two outs, you’re up two runs, you have gotten a hit earlier in the game off me, we are playing the shift, and he laid down a bunt basically simply for average.”

Lewis’ criteria for judgment was that once Rasmus reached base, he didn’t try to steal and get himself into scoring position. “That tells me he is solely looking out for himself, and looking out for batting average, and I didn’t appreciate it,” he said, digging himself into a dangerous rabbit hole of inanity. Left unexplained: If in Lewis’ mind the game situation dictated that Rasmus wasn’t allowed to bunt, the question isn’t whether the pitcher’s head would have exploded had Rasums stolen a base, but how violently.

Hell, Curt Schilling didn’t take offense when Ben Davis bunted against him to ruin his perfect game in 2001. That’s because, like the game in Toronto, the score was 2-0 and a baserunner could have made a difference.

Or one could look in another direction: When Jarrod Saltalamacchia bunted to break up a perfect game against Oakland’s A.J. Griffin in 2012, he was barely faulted for it by Oakland manager Bob Melvin, not because the score was close but because Melvin had put on a shift similar to the one Texas used on Saturday. “I probably should have had the third baseman in,” said Melvin at the time.

Ultimately it’s up to players to recognize what is and isn’t appropriate, and to be damn sure they’ve been aggrieved should they get their jocks in a bunch over a given play. The Code is a powerful part of baseball’s social fabric, but only when it’s leveraged properly. Because the facts of the matter don’t back him up, all Colby Lewis is left with is a bunch of hot, angry air.

6 thoughts on “The Air is Hot, Smart or Not, Deep in the Heart of Texas”