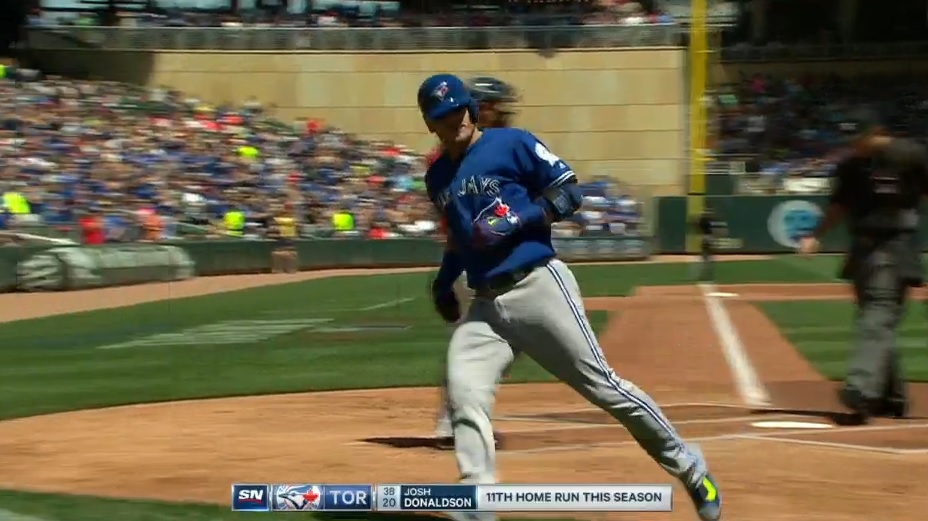 Blue Jays MVP Josh Donaldson—after getting targeted by pitches twice against the Twins over the weekend—garnered attention yesterday by decrying baseball’s unwritten rules as a matter of personal safety.

The direct quote, via SportsNet.ca:

“Major League Baseball has to do something about this. They say they’re trying to protect players. They make a rule that says you can’t slide hard into second base. They make a rule to protect the catchers on slides into home. But when you throw a ball at somebody, nothing’s done about it. My manager comes out to ask what’s going on and he gets ejected for it. That’s what happens. I just don’t get the point. I don’t get what baseball’s trying to prove. If I’m a young kid watching these games, why would I want to play baseball? Why? If I do something well or if somebody doesn’t like something that I do, it’s, ‘Oh, well, I’m gonna throw at you now.’ It doesn’t make sense. It just doesn’t make sense to me.”

Donaldson’s issues started with the third pitch of Saturday’s game—a called strike with which he disagreed. When he grounded to short on the very next pitch, Donaldson slowed down before reaching first base, according to the Toronto Sun, at which point Twins bench coach Joe Vavra yelled “nice hustle.”

When Donaldson returned verbal fire, plate umpire Toby Basner, thinking the comment had been directed at him, ejected the third baseman.

In the first inning of Sunday’s game, Donaldson hit a mammoth home run to straightaway center field. Instead of immediately returning to his own dugout, however, he took a couple steps toward the Twins bench on the first base side of the field, staring daggers all the while. (Watch it here.) His explanation: “I looked right at the guy who chirped me yesterday and got me thrown out, I was letting him know I was coming to play today. Don’t comment on the way I play. It’s not your business how I play. I’m not on your team. If someone has a problem with the way I play, my manager or teammates will say something to me, not the other team.”

In the sixth inning, Minnesota’s Phil Hughes responded by throwing one pitch that just missed Donaldson’s hip, and another behind his back. The intent was obvious. Jays manager John Gibbons, after vigorously arguing for Hughes’ ejection, was instead ejected himself.

At the core of his argument, Donaldson has a legitimate beef. In the modern landscape, non-baseball activities—like, say, a few moments’ worth of dugout stare-down—virtually never merit physical retribution.

What Donaldson received, however, was decidedly not physical retribution. No pitch hit him, and, given that Donaldson himself used Hughes’ excellent control to support his claims of intent, things seemed to play out the way Hughes wanted them to.

There are a couple of takeaways here. One is that the incident that so upset Donaldson—Vavra riding him from the bench—illustrates just how thin ballplayers’ skin has grown over recent generations. Bench jockeying was once an art form, with insults hurled as much to distract the target as anything else.

In the 1922 World Series, Giants manager John McGraw’s dugout-borne insults distracted Babe Ruth into a 2-for-17 slide—his worst Fall Classic ever. Hell, even Ruth’s called shot in the 1932 World Series was apparently a gesture meant to silence the bench jockeys in Chicago’s dugout, not to predict the homer he was about to hit.

Leo Durocher once rode opposing pitcher Claude Passeau so hard that upon being removed from the game, instead of handing the ball over to his manager, the pitcher fired it at Durocher, in the Brooklyn dugout.

No less a name than Mickey Mantle was so hounded by the Washington Senators that he failed to run out what became a double-play grounder, distracted to the point that he thought the lead out was the third of the inning.

Those, of course, are long-ago examples. Serious bench jockeying died out in the 1960s and ’70s. Still, “nice hustle” seems timid enough to ignore. Donaldson labeled it as the Twins “picking a fight from the bench,” but in reality, his decision to return fire—and subsequently getting tossed for it—is entirely on him. That’s precisely the result a good bench jockey is looking for.

The other part of the equation involves the pitches themselves.

Had Hughes hit him in the neck or the eye, Donaldson’s point would be unassailable. Even had Hughes drilled him in the time-tested fashion of planting one into his hip or thigh, or had he missed above the shoulders, Donaldson would have a legitimate gripe.

But a message pitch—even two of them—that fails to connect is not worth this level of vitriol. You mess with us, Hughes told Donaldson and the Toronto bench alike, and we’ll mess right back. It was a non-contact exchange of ideas, and that’s the sort of thing that helps keep baseball lively.

If you throw as hard as Aroldis Chapman, you must expect that your opponents will, on occasion, get squirrely. Should a ball get away from you and fly toward somebody’s head, this matter becomes especially prevalent. Should it happen twice in an inning—watch out.

Thursday, it happened twice to a single batter, Nate Schierholtz of the Cubs, and Chicago was not pleased. The pitches were obviously unintentional: The game was tied in the ninth inning, which is when closers pitch, which is why we so infrequently see closers carrying out any form of retaliation. The Cubs let Chapman know about it anyway, from the dugout at top volume. Things could have ended there, but for Chapman’s subsequent dismissal of the entire Chicago dugout—delivered with an insouciant wave of his glove toward their bench as he was leaving the field after recording the inning’s final out.

When Cubs first baseman Anthony Rizzo took the field in the bottom half of the inning, it was time for the Reds dugout to weigh in. Rizzo had already been hit by a first-inning pitch from Homer Bailey, and was one of the primary Cubs to heap verbal abuse on Chapman. Somebody wearing Red said something with which he disagreed, and, throwing down cap and glove, he headed for the Cincy bench. Only a fool would have started a fight at that point, facing a line of guys in the other team’s uniform, and Rizzo is no fool. He did some shouting, however, and the Reds shouted back and the dugouts emptied. (Watch it here.)

It’s easy to ask what could have been done to avoid all this. It’s yet unknown what Cincinnati players yelled at Rizzo, but a ballplayer has little business approaching the opposing bench like that. It’s unknown what Cubs players yelled at Chapman, but he has to be aware enough to realize that multiple top-speed, head-high pitches at the same batter are going to elicit a response.

There’s something else at play here, as well: the disappearance of the quality bench jockey from the modern game. Once, players freely ragged each other from across the field in a back-and-forth patter designed to build unity on one side of the field and to get into players’ heads on the other. There were terrible aspects to the practice, such as what Jackie Robinson had to deal with on a fairly continual basis during the early part of his career, but there was also good to come from it. The patter between ballplayers took on a language of its own, and even as one side figured out just what to say to somebody in a given situation, players learned how to absorb the abuse without letting it get to them. The best bench jockeys performed verbal kung fu, turning the abusers’ words back on them with additional heft.

Perhaps the best summation of the process came in a tale about none other than Leo Durocher, told in Sport Magazine in April 1947:

Once last summer (Durocher) was abusing Murry Dickson, Cardinal pitcher, from the coaching box so violently that umpire Lee Ballanfant begged him to lay off.

“I don’t doubt it,” interrupted Durocher, “and after the game, I’ll be willing to buy Dickson a steak diner with champagne trimmings and take him to a show. But right now I want to beat him any way I can, see?”

Bench jockeying more or less died out in the 1980s, the victim of an evolving game. “I don’t know if it was just the teams not being teams for a long period of time together, a lot of player movement, playing with a bunch of different people, not having that team chemistry like that,” said Chris Speier, whose 19-year career ended in 1989, and who put up with a lot of it early in his playing days. “I don’t know when it stopped, but it definitely has stopped.”

Baseball diamonds are a more genteel place now, in many ways for the better. Still, when something comes up like what came up in Cincinnati yesterday, the downside of the disappearing bench jockey becomes clear. Modern players simply have comparatively little idea about how to deal with this kind of adversity.

Take the story of another Reds player, pitcher Mario Soto, who in 1982, rattled by heckling from Phillies third base coach Dave Bristol, walked six and gave up seven runs over 3.2 innings. He was so mad that after the game he called Philadelphia’s clubhouse and challenged Bristol to a fight. His manager, Russ Nixon, offered a different perspective. “That’s just something Mario is going to have to learn to deal with,” he said.

It was just as simple as that.