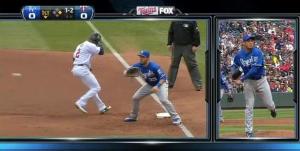 Yesterday, Bruce Chen threw to first 10 consecutive times in an effort to keep Minnesota’s Denard Span close to the bag. (Watch them all here.) Span never ended up taking off, and Yahoo’s Kevin Kaduk wondered whether there might be an unwritten rule to cover situations like this.

The short answer: Not that I know of. Winning is paramount, and if it makes sense to a pitcher to go nutty in his efforts to keep a runner from stealing, he’s entitled to it. Had it happened in the middle of a blowout, of course—as opposed to the first inning of a scoreless game, as was the case for Chen—then the pitcher would have to field angry questions from his own dugout, as well as that of the opposition.

Because we’re on the topic, here are some unwritten rule incidents involving pickoff throws, which have nothing to do with the frequency of attempts.

Fight pre-emption via Code violation. Seems like as good a reason as any.