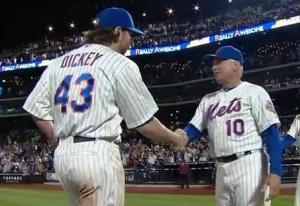 Jay Schreiber of the New York Times raised an interesting question yesterday: Did Mets manager Terry Collins do the game a service by keeping his infield back with a runner on third and one out in a game New York led, 9-0, in the ninth inning over Tampa Bay?

The mitigating detail: R.A. Dickey hadn’t allowed a run in 32 2/3 innings, and while the knuckleballer wasn’t exactly approaching Orel Hersheiser’s record 59 consecutive scoreless frames, it was at least close enought to contemplate the possibilities.

Collins, however, was adhering to the Code—he claimed as much after the game—playing specifically not to stifle the opponent during a blowout with an unnecessary display of superiority, and happy to give up a run for a chance at an out. Sure enough, an infield out led to a run and the end of the streak.

Schreiber’s question: “Would Collins have kept the infield back in that situation and allowed Dickey’s streak to end on a simple grounder to short [had Dickey been at 52 or 53 innings instead of 32 2/3?]

The answer is, probably not, and justifiably so; in many situations through history, a player’s chance at greatness has trumped the unwritten rules. From The Baseball Codes:

Properly dealing with records—either one’s own or someone else’s— has long been a part of the Code. It’s why Yankees outﬁelder Tommy Henrich laid down a curiously timed ninth-inning bunt to avoid a possible double play, assuring Joe DiMaggio another chance to extend his hitting streak in 1941. (DiMaggio did.)

It’s also why, when Yankees second baseman Bobby Richardson went into the ﬁnal day of the 1959 season needing a hit in his ﬁrst at-bat to push his average to .300, manager Casey Stengel informed him that since the Yankees didn’t have a single .300 hitter on the roster he’d be immediately removed from the game should it happen, to avoid falling below the mark in ensuing at-bats. It’s also why members of that day’s opponent, the Bal­timore Orioles, took up the cause: Brooks Robinson informed Richardson that he’d be playing deep in case the hitter found appeal in bunting; pitcher Billy O’Dell offered to groove pitches; and catcher Joe Ginsberg verbally called for pitches instead of dropping down signs. Umpire Ed Hurley even got in on the act, offering that, if Richardson could “just make it close,” things would go his way. Said Richardson, “There couldn’t have been a more complete ﬁx on.” (The ﬁx might have been on, but it wasn’t complete. Richardson doubled in his ﬁrst at-bat, refused Stengel’s entreaties to leave the game, went 2-for-3, and ended up at .301.)

There are also some examples regarding Hersheiser’s record, the one Dickey was not allowed to approach, and Don Drydale’s mark prior to Hersheiser breaking it. The Code adherents in these cases weren’t players, however, but umpires:

When Drysdale was on the precipice of breaking Carl Hubbell’s National League record for consecutive scoreless innings in 1968, he loaded the bases against the Giants with nobody out in the ninth inning. When he hit the next batter, Dick Dietz, it forced in a run and killed his streak at forty-four innings, four outs short of Hubbell’s mark. Plate umpire Harry Wendelstedt, however, ruled that Dietz made no effort to get out of the way of the pitch, and ordered him back to the plate with a full count, whereupon he ﬂied out to shallow left ﬁeld. Drysdale got out of the inning unscathed, in the process tying Doc White’s 1904 record with his ﬁfth straight shutout, and eventually ran his streak to ﬁfty-eight and two-thirds innings.

If Drysdale needed assistance from an umpire while playing the Giants to set his mark, so too did the successor to his record. In 1988, Orel Her­shiser compiled forty-two consecutive shutout innings in pursuit of Drysdale’s standard before ﬁnally allowing a run on, of all things, a ﬁelder’s choice—against the Giants, of course. Umpire Paul Runge, how­ever, belatedly called hitter Ernie Riles out at ﬁrst, ruling that baserunner Brett Butler went out of his way to interfere with Dodgers shortstop Alfredo Grifﬁn on the play at second, ending the inning and wiping the run off the board. (“That slide was just like every other time I slid,” said an indignant Butler, who had indeed advanced directly into the bag.) Her­shiser went on to run his scoreless-innings streak to ﬁfty-nine. “It was a slow chopper, and there was no way they were going to get him at ﬁrst no matter what I did, so what incentive did I have to try to take [Grifﬁn] out?” said Butler. “A lot of times when records are in the balance like that, there’s no explaining some of the things that happen. People react in dif­ferent ways.”

Ultimately, it would have been difficult to protest against Collins looking out for the interests of his pitcher in such a situation. His strategy would have had nothing to do with disrespecting the Rays, and everything to do with propping up R.A. Dickey.

Not much fault to find with that.