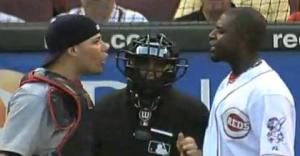 This is what can happen when a player utters even a syllable too many about his opponent. (Though to be fair to the Cardinals, “little bitches” is a full four syllables.)

A day after forgetting to use his inside-the-clubhouse voice when discussing feelings about the St. Louis ballclub with the press—which included referring to them by the above epithet—Cincinnati’s Brandon Phillips stepped to the plate yesterday as the Reds’s first hitter of the game.

Upon entering the batter’s box, he tapped his bat on the shin guards of Cardinals catcher Yadier Molina and plate ump Mark Wegner as a means of greeting.

There’s nothing wrong with this. It’s standard practice for Phillips, meant as nothing but a friendly hello.

At least until he encountered a short-fused catcher who clearly prefers that his team be referred to in terms more genteel than “little bitches.”

“Why are you touching me?” he asked Phillips, as reported in the Cincinnati Enquirer. “You are not my friend, so don’t touch me.”

Phillips had thrown down the gauntlet with his comments, and Molina was only too happy to pick it up. Both teams flooded the field, and the scrum quickly turned into a baseball rarity—a fight in which actual blows were thrown. Managers Dusty Baker and Tony La Russa were ejected. (Watch it here.)

The appropriate response to Phillips and Molina: Grow up a little.

The unwritten rules mandate on-field retaliation only for on-field breaches of etiquette, and nothing more. Phillips ran his mouth, and the Cardinals responded in the best way possible, holding him to a combined 1-for-10 over the ensuing two games, while winning both to move into a tie with Cincinnati in the NL Central.

Molina should have let his comments go, and concentrated on the game, not a silly schoolyard spat. (He did use the confrontation as a bit of personal motivation, hitting a second-inning homer off Johnny Cueto.)

Now, what had been an unendorsed bit of foolishness from a single player has turned into genuine bad blood. It certainly helps make things interesting as the teams battle for the division lead, but these matchups are loaded with motivation based on baseball alone. Watching players act like testosterone-fueled kids does nothing for the purity of a good stretch drive.

During the course of the festivities, Baker and La Russa got into it, bringing quickly to mind the fact that they haven’t had the smoothest relationship over the years.

When Baker was with the Cubs in 2005, La Russa went public about concerns over Kerry Wood’s inside pitches, which was followed by Cards pitcher Dan Haren hitting his counterpart on the Cubs, Matt Clement.

Baker took it as an attempt at “selling wolf tickets,” or overtly trying to intimidate his team, saying in the Chicago Tribune that “no one intimidates me but my dad and Bob Gibson—and this bully I had in elementary school. But I grew bigger than him, and he stopped bullying me.”

The two eventually met and settled things, but it didn’t take long for their history to bubble to the surface yesterday.

Another unwritten rule was broken in the middle of the crowd of players, when Cueto, backed up against the backstop by a pile of humanity, opted to kick his way free.

There are rules to any fight; in the Code-driven world of professional baseball, this is especially true. It’s why Izzy Alcantara has gained such notoriety, and why Chan Ho Park’s attempted drop kick of Tim Belcher in 1999 continues to be replayed.

Square up and hit a guy, if you must, but the unwritten rules stipulate that kicking a player as means of attack is less than manly; something even for little bitches, if you will.

Cueto’s spikes landed, apparently repeatedly, on the face of St. Louis catcher Jason LaRue, who suffered a concussion and bruised ribs, and has been ruled out of playing today—and possibly much longer.

Cueto was on the mound for the Reds yesterday, but batted first with two runners on, and later during a 2-2 game. Neither situation was appropriate for retaliation.

The teams meet again in early September. This time, on-field payback—should that be the route the Cardinals choose to take, and with La Russa at the helm, it’s a good bet—will be entirely appropriate.

Update (Aug. 12): Cuteo has been suspended for seven games—effectively, two starts—for his part in the brawl. If he knows what’s good for him, he’ll appeal in an effort to delay his punishment until just before the Reds visit St. Louis on Sept. 3.

13 thoughts on “A Dark Day for Baseball Etiquette in Cincinnati, Pretty Much All Around”