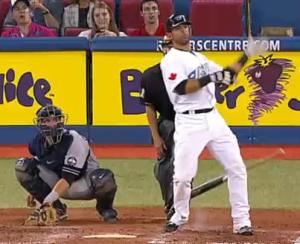 Jose Bautista’s first home run Monday meant little on its own, save for being the slugger’s major league-leading 39th of the season.

His second home run Monday meant a lot more, at least to him.

The difference: What happened in between.

The hitter took it as a response to his earlier bomb. Nova was more likely just wild, considering that it was his first start as a big leaguer. Bautista had words for the right-hander as he approached the mound, Nova didn’t back down at all and benches and bullpens quickly emptied onto the field.

Although no punches were thrown, the incident served as a prelude for an interesting response from Bautista after he hit another home run, in the eighth.

Baseball will tolerate a degree of showboating, so long as it’s in response to a Code violation. Bautista’s reaction to his second home run (the eventual game-winner, hit off of reliever David Robertson) started with a bat flip in conjunction with a glare toward the mound. It ended with one of the slowest home-run trots in the big leagues this season, and some fist pumping upon reaching the plate. (Watch it here.)

In addition is the notion that rookies must be tested, which, admitted Bautista, is what motivated his sixth-inning outburst, at least in part.

“I was just trying to see what kind of reaction I was going to get from him,” he said in the Bergen Record. “I was surprised to see he was pretty defiant. He was walking up toward me and flashing his hands up and started yelling.”

Part of Bautista’s motivation was to use Nova’s response to gauge intent. Despite the pitcher’s repeated assertion (in Spanish) that “I don’t want to hit you,” that, said Bautista, was “when I felt that the pitch was intentional.”

Bautista might have already been angry at a Toronto Star columnist who suggested that his power surge might be artificially fueled, using exactly zero pieces of evidence to back up his claim. (Bautista denied everything.)

Blue Jays fans can only hope that he continues to take out his anger on baseballs across the league.

One thought on “Bautista’s Game-Winning Homer Conveys Message, then he Conveys it Again”