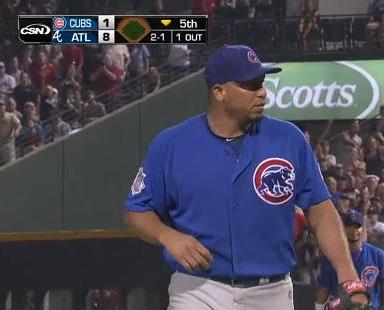 There is only one purpose for the unwritten rule mandating that all players make an appearance during a baseball fight. Even those without intention of throwing a punch, who want only to serve as peacemaker or to pull bodies off the pile, prove their loyalty through their very presence in the scrum.

The inverse, however, can be catastrophic. Should a player remain on the bench or in the clubhouse as his teammates storm the field, the personal toll may be irreparable. It doesn’t happen frequently, but such players are seen as soft, at best, and disloyal, at worst. Their clubhouse standing is immediately shredded.

Last week we saw the inverse, as it related to a player whose standing with his teammates was apparently already in tatters.

On Aug. 12, Carlos Zambrano threw two pitches at Chipper Jones after giving up back-to-back homers (the fourth and fifth he’d surrendered on the night) and was promptly tossed from the game. Players came streaming out of the Atlanta dugout to defend their star.

From the Chicago side: nobody.

(Well, there was manager Mike Quade, who ambled out to chat with plate ump Tim Timmons. Watch it here.)

It’s difficult to say where Zambrano lost this clubhouse among the myriad possibilities. In 2007, he fought openly with teammate Michael Barrett. In 2009 he had an in-game meltdown so severe that MLB suspended him for six games; then he missed the team’s flight to Atlanta. In 2010 he screamed at teammate Derek Lee in the dugout, for which he was suspended by the Cubs and which precipitated his enrollment in anger-management therapy. Earlier this season he called the Cubs a “Triple-A team.”

After Zambrano’s meltdown against Atlanta (which also included drilling Dan Uggla after the first of his two home runs on the day), Alfonzo Soriano confronted him in the clubhouse. Shortly thereafter, the pitcher packed his bags, told people he was retiring and left the ballpark before the game ended.

“I’m really disappointed,” said Quade in the Chicago Tribune. “His locker is empty. I don’t know where he’s at. He walked out on 24 guys that are battling their (butts) off for him. . . . I can’t have a guy walking out on 24 guys, that’s for damn sure.”

Cubs GM Jim Hendry called Zambrano’s retirement bluff, saying, “We will respect his wishes and honor them and move forward.” (Hendry also apologized to the Braves for the pitches aimed at Jones. Of course, Hendry is the guy who signed Zambrano to a five-year, $91.5 million extension in 2007. The team fired him today.)

“I’ve never seen that before, someone just get (ticked) off and leave and retire,” said Aramis Ramirez. “I’ve been around for awhile. Even with him, players don’t do that.”

Before long, of course, the pitcher reconsidered, offering apologies and going on a mea culpa media tour. The fact that he’s owed $4.7 million for the remainder of this season, and $18 million next year, were likely motivating factors.

That’s the thing about losing the respect of teammates, however—returns are never easy. The Cubs placed Zambrano on the disqualified list, resulting in a 30-day suspension without pay. The players’ union filed a grievance on his behalf.

The Cubs’ next GM, whoever he is, is not likely to embrace the idea bringing back Zambrano, who by that point will be somebody else’s mistake. But even if the union wins, the Cubs fail to cut him and Zambrano returns to Wrigley, it won’t be an easy ride.

Beating management is one thing, but the guy can’t beat his teammates—he has to win them back.

And when quitting is concerned, we all know how that goes.