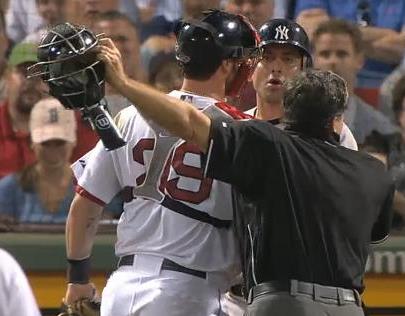 So Francisco Cervelli hit a big home run and clapped his hands in celebration as he stepped on the plate, directly under the nose of Red Sox catcher Jarrod Saltalamacchia.

The next pitch Cervelli saw hit him square in the back.

It certainly looked incriminating, and although pitcher John Lackey denied all intent, that’s what he’s supposed to do. The Yankees broadcast crew jumped on it immediately, with Michael Kay not missing a beat after Cervelli was drilled before saying, “I’m going to tell you why Cervelli just got hit. I will tell you why. Because when he hit the home run he celebrated at home plate and clapped his hands right in front of Saltalamacchia.” The telecast then cut to a pre-queued clip of the moment. (Watch it, preceded by the home run itself, here.)

Kay was hardly the only one to see it in this light. Another example, from the Boston Globe, which structured its use of quotes to paint a particular picture:

“He was pumped for that [third] home run of his career,” Lackey said. “I thought it was a little excessive, honestly.”

Said Saltalamacchia: “He’s done a lot of that stuff. … He likes to get excited. That’s fine. As far as the clapping goes, yeah, it could have been a little much. You don’t show anybody up. You play the game the way you play it. You’ve got to stay in your boundaries.”

Seems pretty cut and dried. There are some compelling arguments to the contrary, however.

Start with the fact that the Red Sox trailed 4-2 at that point in the seventh, and Lackey’s primary job was to keep that deficit static. The last thing he’d rationally want is to put the leadoff hitter on base with the lineup about to turn over. (Sure enough, Cervelli came around to score New York’s final run.)

Said Lackey in the Boston Herald, “I’ve been fined twice for hitting guys this year and I’ve paid them because they were right. But this one, I’m not afraid to tell you if I’m trying to hit somebody. I would’ve told him to his face.”

The statement that rang truest from Lackey, from the New York Daily News, pointed out in stark terms every truth of the situation. The Globe excerpt above utilized part of it, but cut out the key final sentiment.

“(Cervelli) was pumped for that ninth home run of his career (third actually), yeah. I don’t know. I thought it was a little excessive, honestly, but that’s not a spot you handle something like that.”

Naysayers can start their counter-arguments with the fact that this game doesn’t mean anything because Boston and New York are both going to the playoffs, then talk about Boston wanting to avoid facing Justin Verlander twice in the ALDS.

But those who think a starting pitcher in the midst of a pennant race is willing to compromise a victory in order to take care of some vendetta—especially with five games remaining between the teams during which to drill Cervelli at a more opportune moment—must ignore an awful lot of reality to do so.

More of an affront to the Code than anything Lackey did was Cervelli’s celebration—specifically, where it took place. Had he clapped his hands upon seeing the ball leave the yard, the Red Sox would not likely have noticed. Had he waited for several steps after crossing the plate, on his way back to the dugout, same thing.

As Craig Calcaterra wrote over at HardballTalk, “Cervelli pumps his fist when he gets a good sandwich. He woops it up if he tosses a wadded up piece of paper into a trash can on the first try. If Cervelli gets one more home run in his career it’ll be a gift from the friggin’ gods, so let him have his little moments.”

Done and done. The guy has to measure those moments, however, to ensure they occur somewhere than directly in front of his opponent. Otherwise, he can expect more of the same kind of treatment he received from Lackey.

Perhaps next time it’ll even be intentional.

3 thoughts on “Cervelli-abration: How Much is Too Much, and What to do About it?”