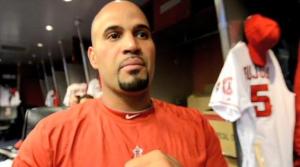 The first rule of clubhouse meetings: Do not talk about clubhouse meetings. This is the sanctity of the clubhouse at its most pervasive, where players—unburdened by the presence of media and sometimes their own coaches—are allowed to speak freely in an effort to right a reeling ship. Things can be said, tempers can flare, fists can fly; none of it matters beyond the clubhouse walls, because the doors are closed.

So when Angels hitting coach Mickey Hatcher talked about Albert Pujols’ sentiments at a recent such meeting with his teammates—saying that he “essentially stood up and told his teammates that he won’t be flailing as he is all season,” according to CBS Sports’ Scott Miller—it rubbed Pujols the wrong way.

Never mind that everything Hatcher relayed was positive. (Pujols reportedly also talked about how he’s been on clubs that have overcome slumps and losing streaks, and affirmed that it can be done.) Pujols’ public messaging should be up to him. If he wanted to say that to the press, he easily could have.

Hatcher played in the big leagues for 12 years. Was a World Series hero. (Hell, he should know these things as well as anyone, having had his Dodgers team spurred into action in the 1988 NLCS by a glorious, bile-filled, closed-door rant from Tommy Lasorda, in which the Dodgers manager ripped David Cone for saying that pitcher Jay Howell reminded him of a high school pitcher, even though that hadn’t quite been the case. L.A.went on to dispatch the favored Mets in seven games.)

To this point in his career, Pujols has known nothing but Tony La Russa’s brand of baseball operations, and is clearly getting used to having things run a little bit differently. He’s scuffling right now, and is apparently very sensitive. He’s also entitled to his privacy—at least in matters that unfold under private circumstances.

For good or for bad, this is now Albert’s clubhouse. And he’s letting everybody know how he wants it to run.