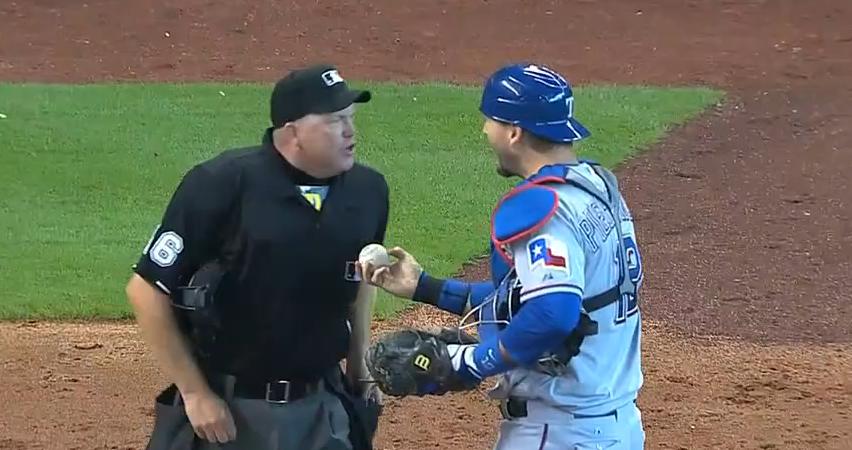 Don’t change anything during the course of a no-hitter. By now, that much should be obvious. Players don’t change spots on the bench between innings. Managers don’t make unnecessary substitutions (except for those who do). The mere appearance of a reliever warming up in the bullpen can be enough to send the superstitious into fits of nervous twitching.

Monday, however, brought us something entirely new in the realm of not mixing things up, and it only makes sense that the delivery person was A.J. Pierzynski.

Yu Darvish, working on a perfect game in the sixth, threw a 2-2 breaking ball to Jonathan Villar, which Pierzynski thought was strike three, but which plate ump Ron Kulpa judged to be too low. The fact that the catcher leapt from his crouch and took a step toward the dugout before hearing Kulpa’s ruling earned him no favors.

Darvish walked Villar on the next pitch, giving the Astros their first baserunner, and Pierzynski was none too pleased. After the game, Kulpa explained what happened. As reported by MLB.com:

“Pierzynski didn’t like the pitch that I [called for a ball]. We had words about the [2-2] pitch. And then [Darvish] walked [Villar] on the very next pitch and [Pierzynski] continued to argue on the pitch before. And so he got ejected.” (Watch it here.)

Talk about changing things up. Game action was interrupted while Ron Washington came out to argue and backup catcher Geovany Soto raced to put on his gear. Suddenly Darvish was throwing to a different target. The right-hander denied that any of this had to do with the home run he gave up to catcher Carlos Corporan two frames later (indeed, Soto has caught 10 of Darvish’s 22 starts this season, so lack of familiarity is not a problem), but history is not on his side: Only twice has a pitcher thrown to more than one catcher during the course of a complete-game no-hitter—Ken Holtzman in 1969 and Larry Corcoran in 1880.

The question now becomes one of blame. Did Kulpa have too quick a trigger finger, especially considering the enormity of the situation? Should Pierzynski have played it cooler, knowing what was at stake?

The answer to both questions is a resounding yes. Had either of them shown just a skosh more restraint, it’s possible that the baseball world would be celebrating Darvish right now even more than it already is.

(For what it’s worth, Darvish came within one batter of a perfect game at the same ballpark in April. Some feel he was jinxed in that one, too.)

3 thoughts on “Darvish Nearly Perfect From the Mound. The Guys Behind the Plate, Not So Much”