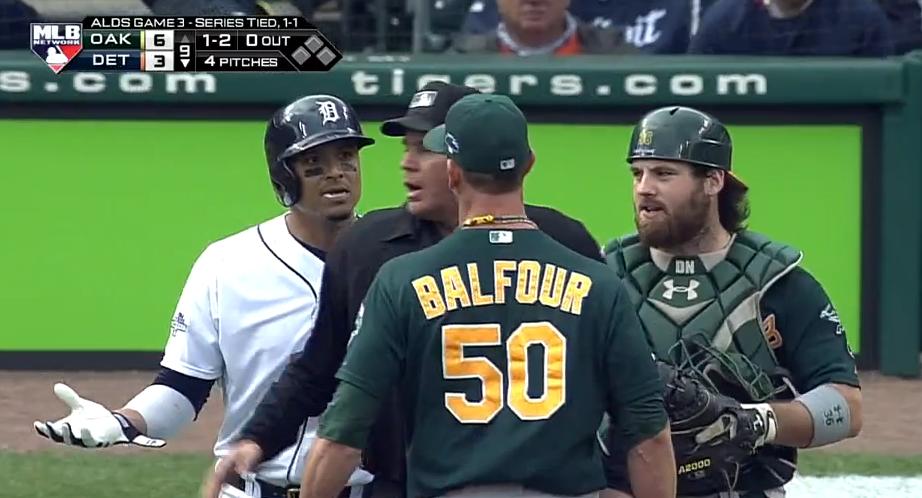 Victor Martinez looked at Grant Balfour during the ninth inning of yesterday’s ALCS Game 3. Apparently he didn’t do it correctly.

Balfour began jawing. Martinez jawed back. They exchanged at least 16 letters’ worth of four-letter words. Dugouts emptied. Angry hops behind phalanxes of teammates were hopped. Then Balfour got back to his job, got three quick outs, and sealed Oakland’s 6-3 victory.

Balfour is fiery. Also, Australian. He does a lot of spectacularly accented shouting on the mound, usually toward nobody in particular. It does, however, further his goal of being as intimidating as possible.

Martinez was having none of it. After fouling off a 1-2 pitch, he stared down the pitcher while adjusting his batting gloves. Upping the ante, Balfour impolitely told him to knock it off. Martinez responded in kind. According to videotape evidence, each thinks the other is a “bitch.” (Watch a bleeped version here.)

“Fuck that,” Martinez said to reporters after the game. “Not even the greatest closer, that’s Mariano [Rivera], tells you stuff like that. I’m not a rookie that he’s going to come in and say little shit like that.”

Balfour’s intimidation jab, it seems, was successfully parried. (It’s easy to say that Balfour is now in Martinez’s head, putting the hitter at future disadvantage, but it would be just as easy to say that Martinez did the same thing in reverse. )

The moment calls to mind one of the least plausible mound charges in history, mostly because it came from a guy widely considered to be among the best human beings to wear a baseball uniform. It was 2001, and in a game between the Royals and Tigers, Mike Sweeney caught everybody by surprise by going out of his squeaky-clean character to charge pitcher Jeff Weaver.

His reason: Weaver, he said, “said something I didn’t like.”

(Weaver’s insult came in response to Sweeney’s request that the rosin bag be moved to a different spot on the mound.)

Sweeney tackled Weaver, punches were thrown and the game was delayed for 12 minutes.

“It’s something I’ve never done before and it’s something I’m not proud of. But I had to do it,” Sweeney said later. “Weaver is a talented young pitcher, but I’d like to see him respect the game more. Tonight, what he did was uncalled for and I did what I did.”

The lesson: Don’t mess with a man’s respect.

Another incident had a more lasting impact. In 1931, the White Sox were playing an exhibition game against a Houston club from the Texas League, whose 20-year-old pitcher, reported Sport Magazine (and re-reported in David Gallen’s book, The Baseball Chronicles), would not stop talking to the hitters.

“Well, lookee, now watta we got here?,” he said. “Jes’ keep that ol’ bat on the shoulder, fellah. I’m a gonna breeze this here one right across the middle. Now don’t get the catcher fussed up by swingin’ at it. Jes’ save yer strength and watch ‘er go by.”

“What’s going on out there?,” he yelled. “You’re supposed to be a major-leaguer. You’re letting that dizzy kid make a fool outa ya!”

That “dizzy kid” was named Jay Hanna Dean. The next season he would win 18 games for the St. Louis Cardinals en route to a Hall of Fame career. And Bush’s inadvertent nickname stuck; the right-hander’s given name was quickly lost to history.

As for Balfour, he insisted that there were no prior problems with Martinez. He even went so far as to indicate there wasn’t even a present problem.

“It’s all good,” he said in an MLB.com report. “I’m cool with it, bro. Hey, he’s a great competitor. He’s a great hitter. I like a little fire and obviously he does, too. It makes for a bit of fun, right?”