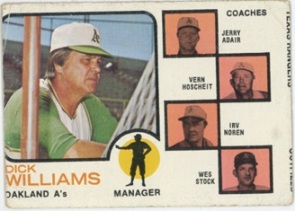 Research for my next book, about the OaklandA’s dynasty of the 1970s, to be published by Houghton Mifflin in 2015, has turned up boundless examples of unwritten rules from that bygone era. Manager Dick Williams tells a tale of running up the score while at the helm of the California Angels, as a means of sending a message to A’s owner Charlie Finley—who had spent three seasons trying to keep his boot heel firmly affixed on the manager’s neck when Williams worked for him. From Williams’ autobiography, “No More Mr. Nice Guy”:

In April 1975, my Angels were leading the A’s 9-1 in the sixth inning of the second game of a doubleheader in Anaheim, and Mickey Rivers was on first base. I decided, up yours, Charlie. I sent Rivers to second base on a hit-and-run attempt. Our batter got a hit and Rivers scored all the way from first. And of course the A’s were angry. When you’re leading by a big margin, running like that is considered crass. Not just because you’re openly challenging the other team or making a comment on their ability to throw you out. Mostly, it’s because you don’t need to run. You’re winning by eight runs, you just need to keep your mouth shut and finish the game. You don’t need to run, and the losing team doesn’t appreciate it. You realize that more baseball fights start because of a needless steal than because of a stupid beanball.

I should mention here that it’s also considered crass for a team leading 9-1 to shout obscenities about the opposing team’s owner from the dugout. Particularly when the owner’s real name is being used, as in “Take that, Charlie, you son of a bitch!” Or perhaps even, “Fuck you, Charlie!” I must admit, that night I let a few such things slip. Was I looking for a fight? You decide. Oakland reliever Jim Todd thought so. He was already mad because, after not allowing an earned run all season, we had touched him up for five. Immediately after Rivers’ steal, Todd’s next pitch was directed at, and collided with, the top of Bruce Bochte’s head.

The first thing I did was run to home plate to check on Bochte. Every manager does that. I leaned down and saw that he still had both eyes. My job was done. Now I did something that most managers would not do. I charged the mound of a team I’d spent three wonderful years managing. I charged the mound and lunged at their 6-foot-2 pitcher, who was about 20 years younger than me but obviously without a gut in his body. He tried to run. I grabbed him by his belt and dragged him to the ground and started pounding on him. That’s right, I took on Jim Todd, and — you guessed it — soon I was rolling around with what seemed like 50 of my former players.

Anybody who knows Dick Williams and saw this scene would think, he’s a dead man. He’s lying on a pitching mound and is fair game for former players who truly are looking for his nuts with their cleats. But I guess the A’s liked me as much as I like them — or at least some of them did. My world darkened underneath a green and gold uniform, but the voice was friendly. “It’s Reggie,” the voice whispered. “I’m just going to lie here on you until this thing ends.” I laughed and he laughed, and we just lay there like two kids playing King of the Mountain while all hell was breaking loose on top of us.

Oakland center fielder Angel Mangual, with whom Williams had consistently feuded, did eventually sneak some kicks in to his former manager’s ribs, but it seems that, for Williams at least, all ended relatively well.

One thought on “1975: Sending a Message in One Easy Step (Beanball Not Included)”