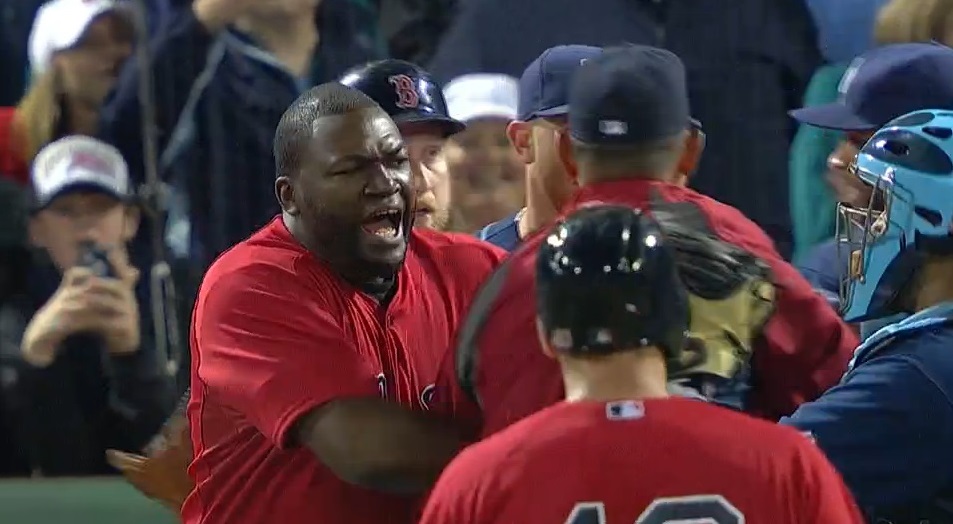 Would David Price have had such a long memory had it been anybody but the Red Sox? We’ll never know unless he tells us, of course, but the answer is, of course not.

In last year’s ALCS, Ortiz hit two long homers off of Price (who gave up seven runs in a Game 2 loss), watching the second for a beat longer than the pitcher would have liked. Afterward, Price complained to the Boston Globe about the possibility that Ortiz was just watching to see if the ball went fair. “I saw it and I knew it was fair,” he said. “Run.”

He faced Ortiz for the first time since then on Friday, and wasted little time making a statement, planting a first-pitch fastball into the slugger’s back. It was enough for plate ump Dan Bellino to issue a warning, but not—contentiously—for Price to be ejected. Umpires are known to delay warnings until the other team has a chance to respond (especially under questionable circumstances such as these), but in a series as combative as this one—which saw benches empty less than a week earlier—Bellino was taking no chances.

Neither was John Farrell, who argued his position to the point of ejection.

Already upset by unrequited aggrievence, the Red Sox grew further agitated when Price hit Mike Carp in the right forearm three innings later. That this one appeared to be less intentional did little to slow the rampage; benches emptied, with Ortiz animatedly pointing toward Price, who for the second time in the game managed to avoid ejection. (Watch it here.)

Not so for backup Red Sox manager Torey Lovullo, who began his conversation with the umpires by spiking his cap, and ended it by trudging off to the showers. Boston’s third manager of the evening, Brian Butterfield, was tossed in the sixth, along with Brandon Workman, when the Red Sox starter threw a pitch behind Evan Longoria.

(Why wait until then? Well, Longoria is Tampa’s biggest gun, and Workman was not long for the game, anyway—the pitch to Longoria was his 89th, the most he’s thrown since last August. As if there would be any other way.)

After the game, Ortiz pulled no punches.  “That’s means it’s a war. It’s on,” he said in a Tampa Bay Times report. “This guy that hit me better bring the gloves on. I have no respect for him no more.”

Fueling his rage was the fact that the Red Sox absorbed four ejections while hitting nobody with a pitch, while Tampa Bay emerged unscathed, despite hitting two.

At least one player in the Rays clubhouse, however, wishes things were handled differently.

“I wish he would have hit me so it could have been done and over right there,” Longoria said. I just don’t want to get hit in the head, just make sure it’s down below the neck. Hopefully we’re beyond it.”

If the Red Sox are playing by the unwritten rules, it should be over. Butterfield had his shot, and he missed (with the possibility that he threw it intentionally wide with the score 2-1, to avoid unnecessary baserunners).

At this point, however, in the self-sustaining biodome of animosity that is Boston-Tampa Bay, all reactions seem to be on the table. These teams have disliked each other so intensely, for so long, that every slight is magnified and the need for response set in stone. While the rest of baseball seems more content than ever to not sweat the small stuff when it comes to the Code, that’s all these two clubs seem to do.