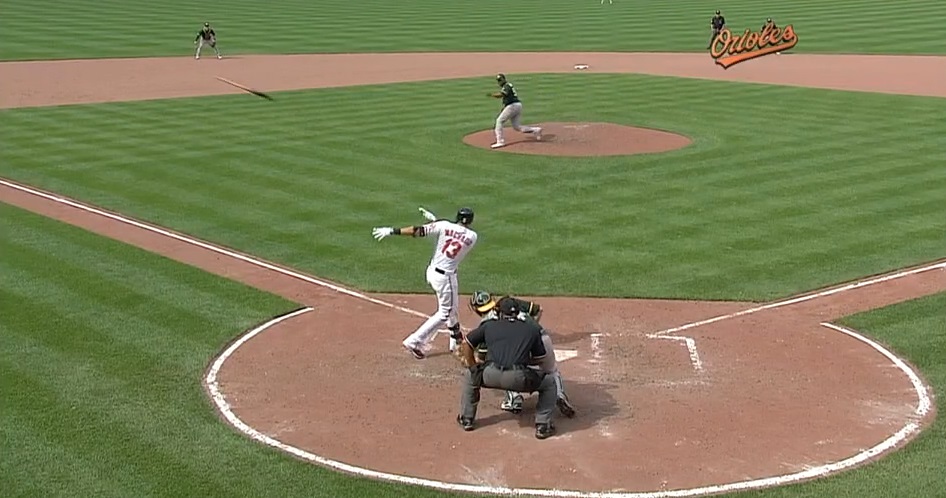 Manny Machado is trying to rewrite the unwritten rulebook, virtually from cover to cover. One day the guy is inventing new things to get angry about, the next he’s figuring out new ways to retaliate for them.

In the process, he’s proved himself to be among the most reckless, hard-headed and downright dangerous players in the game, and should be harshly suspended for Sunday’s action.

Machado’s aggravation with the A’s began on Friday, when he took issue with an ordinary tag by Josh Donaldson, who was later thrown at by O’s reliever Wei-Yin Chen. On Sunday, the young shorstop took it to a new  stratosphere.

Hitters will occasionally come into contact with catchers on a backswing. It happens. That said, it is rare and inadvertent, and because it puts catchers into no small degree of peril—a bat is connecting with their head—hitters who do it are immediately apologetic.

Machado hit A’s catcher Derek Norris with a backswing early in Sunday’s game, then connected again with significant force on an exaggerated follow-through in the sixth, his bat cracking the top of Norris’ helmet. The catcher, stunned, was immediately pulled from the game. Was it intentional? Judge it by Machado’s reaction. The guy didn’t so much as turn around. In fact, as a dazed Norris was being led into the A’s clubhouse, the Baltimore shortstop was caught on camera smirking. (Watch it here.)

“Usually most guys, it’s a, ‘You all right?’ Something,” said Norris after the game, in an MLB.com report. “But, if anything, I might’ve caught him smiling one time, which is kinda bizarre. Not really much [courtesy] coming from his side today. I don’t need a guy to ask me if I feel all right to feel good about a situation, but I think it is courteous for one ballplayer to another to ask if they’re all right. But yeah, nothing.”

This action is beyond the pale. Pitchers who throw at opponents’ heads are shunned by their peers—even those peers who believe in retaliatory pitches. Every one of them cites the idea that aiming a fastball above a player’s shoulders is the quickest way to end a career. Norris is no Tony Conigliaro in terms of long-term impact (at least from the looks of things so far), but a trip to the disabled list to deal with late-manifesting concussion-related issues is not out of the question. That the blow was leveled intentionally, under the scope of game play, is shameful.

Machado compounded matters in the eighth when A’s pitcher Fernando Abad, on to protect a 10-0 lead, threw an inside fastball toward Machado’s knees—almost certainly a response to the backswing, but a mild one. It was not a difficult pitch for the batter to avoid, and it passed unimpeded to the backstop.

Machado waited until the next pitch, then swung and let go his bat—ostensibly to fly at Abad, though it sailed harmlessly down the third base line. It was obvious enough for the Orioles own broadcast crew to proclaim, “Manny Machado thought he was thrown at, and on that swing he let that bat go, intending it to go to the mound.”

A minor pass is given for the fact that Machado is coming off of knee surgery, and is obviously protective of that part of his anatomy. Then again, the reaction fits perfectly with everything we’ve learned about him this weekend. The 21-year-old hothead with the big ego has put some personal and indecipherable code of ethics above the safety not just of his opponents (it appears he’d have been happy to have hit two Oakland players with bats), but his own teammates, should the A’s opt to retaliate at some point in the future. Machado hasn’t yet spoken publicly of some irrational need to be respected, but his actions are those of somebody who feels strongly that he is owed something, despite a decided lack of merit.

O’s manager Buck Showalter pased the buck after the game, saying in the Baltimore Sun that he preferred to let players take care of this kind of thing on their own, and adding that “I thought Manny handled it better than someone with some experience [would]. It was also a good experience for him to have. He cares. It’s a learning experience for all of us.”

If it’s really a learning experience, Machado needs a voice of reason wearing orange and black telling him to knock it off. The Code dictates that one (or more) of Machado’s more senior teammates step in to corral what is looking increasingly like an out-of-control player. That said player is the most talented guy in Baltimore’s system complicates things, but not so much that the team’s veterans can’t bring their voices into the equation.

The A’s may well have a few things to say about the situation when the teams meet again in July, but if things haven’t been handled internally long before then, the Orioles will have far bigger things to worry about than Oakland.

Update (6-9-13): The talking to has happened, at least to some degree. Machado apologized via the team’s TV network.

Update (6-10-13): I can’t see any way this would actually happen, but the Orioles are presenting a serious front: Dan Duquette says that sending Machado to the minors is “an option.”

Update (6-10-13): Machado has been suspended five games, and will appeal. In a less sensible move, Abad has been fined for a pitch that did not hit a batter, after he was thrown out of a game for that same pitch, but only after throwing another, subsequent pitch.

One thought on “Machadope: On the Reckless Pursuit of Imaginary Justice”