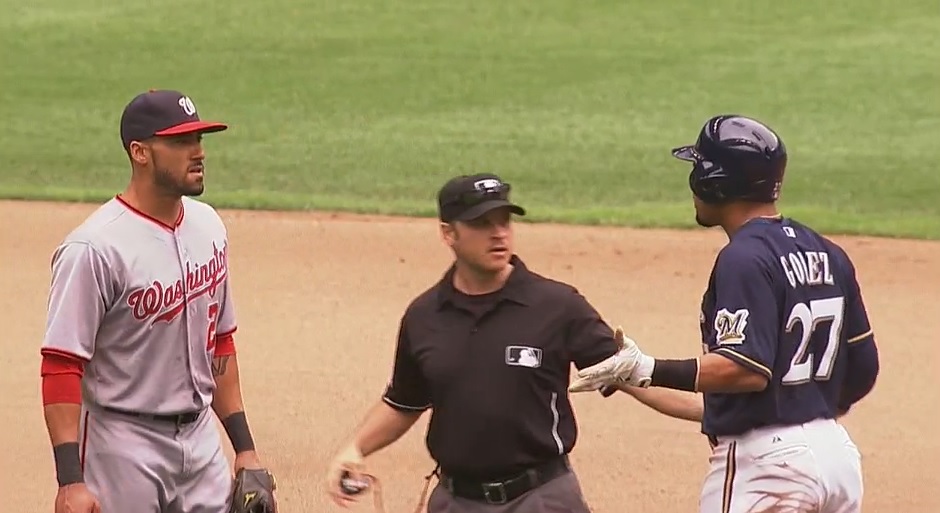 Carlos Gomez has taken heat in this space for everything from pimping to excessive pimping to his inability to handle criticism. Yesterday Gomez again managed to clear the bases over something he did … but this time he was in the clear. Maybe a guy’s reputation can precede him, after all.

In the eighth inning against the Nationals, Gomez was hit on the left arm by reliever Taylor Hill, making his big league debut. The next batter, Lyle Overbay, grounded a double-play ball to shortstop Ian Desmond, who tossed to second baseman Kevin Frandsen on the pivot. Frandsen just managed to get the throw off before Gomez, barreling in hard and fast, took him out with an aggressive slide. This is the kind of thing one does after one has been hit, a message to the other team that such liberties have not escaped notice.

The slide was clean. The message was sent. The inning was over.

Desmond, however, took offense. As his teammates headed toward their dugout, the shortstop stopped for a chat with an incredulous Gomez. Things got sufficiently animated for the benches to clear, though nobody came close to throwing a punch. To judge by the players on the field, Desmond was the only red ass among them. (Watch it here.)

“I just told him I didn’t agree with the way he slid into second base with a seven-run lead,” Desmond said after the game in an MLB.com report. “I’ve defended that guy in a lot of clubhouse arguments. I respect the way he plays the game, but I’ve got no respect for that. If he thinks he got drilled on purpose by our pitcher making his Major League debut … to take it out on a guy who’s grinded his butt off to make a Major League career in Kevin Frandsen … In a World Series game, you slide like that. In a seven-run-differential game, there’s no time for that.”

On that point, Desmond is nuts. Gomez was responding to being hit—a reaction that is independent of circumstance, lopsided score or not. He responded with a clean, aggressive play, in the way that baseball players have always responded to similar events with clean, aggressive plays. On the Nationals broadcast, in fact,  color man (and former player) F.P. Santangelo called it, even as Hill was delivering the double-play pitch to Overbay: “If I’m in the middle infield right now and I’m turning a double play on a ground ball, heads up Kevin Frandsen.”

As the field cleared, Gomez even earned a pat on the back from Washington manager Matt Williams, who knows a thing or two about playing the infield. Hardly the stuff of vendettas.

It’s Desmond’s right to get upset at seeing one of his teammates taken out, but it’s also his responsibility to know the rules of the game as they pertain to propriety. Hiding behind a 9-2 deficit as an excuse to vent frustration is just weak sauce.

4 thoughts on “Takeout Order: One Second Baseman, With a Side of Sour Grapes”