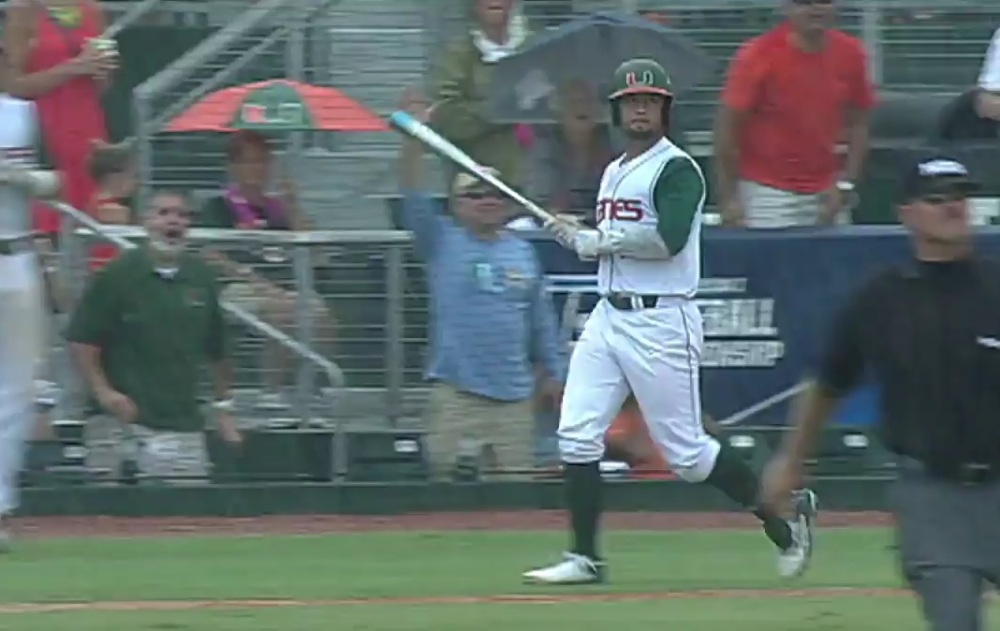 It was bound to come to this. Now that bat flips have become more or less acceptable, somebody had to come along to push the envelope regarding how much will be tolerated. Meet Edgar Michelangeli, newly minted power hitter from the University of Miami, whose ongoing displays of flippitude are leaving all other flippers behind.

In Sunday’s Super Regional against Boston College, Michelangeli hit a grand slam to give Miami a 9-3 lead, then pulled off what has for him become standard schtick—he strolled down the line holding his bat at arm’s length, then tossed it high once he was most of the way to first base.

There are arguments to be made for the spiritual power of a good bat flip—how it captures the spark of success, encapsulates a conquering moment for a home run hitter. Michelangeli’s flip had none of that. It was pure contrivance, an awkward display of self-aggrandizement intended strictly to draw attention to his own prowess as a master preener.

As Michelangeli approached the plate, BC catcher Nick Sciortino had some angry words for him, and benches quickly emptied. (Yes, Michelangeli has done this kind of thing before.) No punches were thrown, but the anger was sufficient for both coaches and the umpiring crew to opt against holding the traditional post-game handshake line.

Yesterday’s confrontation shouldn’t be on Boston College, though. My question concerns what Miami coach Jim Morris is saying about all of this. The guy is in his 23rd year on the job and has national Coach of the Year awards on his mantle, so it’s not like he lacks any sort of institutional authority. Allowing this sort of nonsense to go unchecked is to pass up a teachable moment about comportment, and the points at which glory-seeking become disrespectful to one’s opponent.

At least BC coach Mike Gambino was on point. “What we talk about in our program is character, toughness and class …” he said in an AP report. “I think our boys play hard. I think they play the game the right way. I think they respect the game and their opponents.”

Maybe it’s different in the big leagues, but this is college—a place where kids go to, you know, learn things. Gambino seems to get it. Michelaneli clearly does not.

2 thoughts on “Turns Out That Composite Bats Flip, Too”