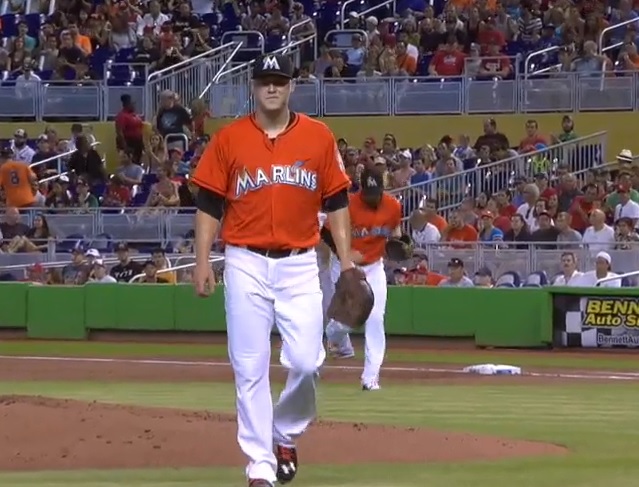 Maybe Andrew Cashner hates the Cardinals. Maybe he just struggles with command. But on July 21, pitching for San Diego, he drilled Matt Holliday in the nose, opening a nasty cut but doing no thorough damage. Yesterday, Cashner’s team had changed but his strategy had not.

In his first start after being traded to Miami, he got right back at it, running an inside fastball that hit Aledmys Diaz on the hand, an injury that eventually forced Diaz from the game.

It made no difference that Cashner was wearing a different uniform when he plunked Holliday. Patterns of abuse—even unintentional abuse—do not go unnoticed in organizations in which Tony La Russa has let his presence. A half-inning after the right-hander drilled Diaz, Cardinals pitcher Carlos Martinez plunked Giancarlo Stanton in the back. Message sent.

With Cashner’s pitch to Holliday on July 21 having come in above the shoulders, dangerously close to doing real damage, it’s little surprise that the Cardinals—whether Martinez was acting on his own or nudged from above—chose to react. The sight of blood will do that, and it’s likely that some in the St. Louis clubhouse had considered retaliation even before Diaz was hit. (The pitch to Holliday a week-and-a-half earlier had been Cashner’s last of the game, in the final game of the series, and a one-run score never allowed for future response on the Cardinals’ part.)

Talking about it later in an MLB.com report, Cashner theorized that it’s “kind of the ‘Cardinal way’ over there.” (St. Louis skipper Mike Matheny said he didn’t “have a thought or anything else” to offer about the exchange.)

The pertinent issue here involves which scores have been settled, because the Cardinals clearly have long memories when it comes to this type of thing.

It’s safe to assume that their response to Cashner wiped his slate clean. Is the same true when it comes to his ex-team, the Padres? We’ve already heard from La Russa that retaliation can be triggered merely by an opponent’s philosophy, if said philosophy involves pitching inside. (For what it’s worth, San Diego doesn’t appear to pitch inside more or less than anybody else, their collective HBPs hovering right around league average.) They don’t face the Cardinals again until next season.

If nothing else, we have one clear takeaway. When a club like St. Louis takes issue with a pitcher, a change of uniform or the removal of facial hair hardly provides sufficient disguise. If Cashner does something similar again the next time he faces the Cards, it won’t matter who he’s pitching for. Retaliation is all but assured.

4 thoughts on “The Cardinal Way is Now Officially a Thing”