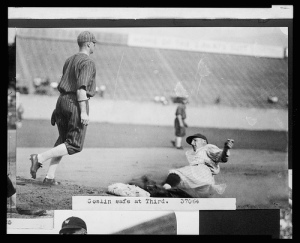 It wasn’t much heralded during the All-Star Game broadcast, but Robinson Cano pulled off a potentially instrumental play in the fifth inning. With nobody out and David Wright taking off from first base on a steal attempt, Twins catcher Joe Mauer threw the ball well over Cano’s head, and into center field.

Cano, however, even in mid-leap, managed to put his glove down in an effort to throw Wright off the scent of what had really taken place.

It worked. By the time Wright located the baseball, it was far too late for him to take third. Sure enough, Wright failed to score in the inning. (Watch it here. The play happens at the :37 mark.)

The deke (short for “decoy”) is an integral part of infield play. Fielders act as if the ball is somewhere it’s not, and runners grow confused. The most famous deke in history was Chuck Knoblauch‘s fake-out of Lonnie Smith in Game 7 of the 1991 World Series, which kept Smith from going to third and likely saved a run (and the game, and series) for the Twins.

Lesser-known examples happen all the time. A few years ago, White Sox shortstop Juan Uribe acted as if a base hit was actually a foul ball, and was so convincing that the base runner returned to first base—and was thrown out.

“It’s a gentleman’s game at times, but if you don’t have your head on your shoulders, things can happen,” said Frank Thomas, who made the tag at first for Chicago.

There is a potential downside. Had Wright gone into a late slide because of Cano’s machinations (not a real possibility in this instance, since he was going to slide anyway), he could have injured himself. Take an example from The Baseball Codes:

A number of players have been injured by ill-timed or unnecessary dekes, which leads to an unwritten rule about when it is and isn’t appropriate to use the maneuver. Inﬁelders throwing down phantom tags at the last possible moment can cause awkward slides, and the potential for damage is very real. “If a guy is stealing, you don’t pretend the throw is coming,” said second baseman Craig Grebeck. “If he’s coming in standing up and you all of a sudden look like the catcher is throwing the ball, a late slide can tear up an ankle or a knee.”

That’s exactly what happened to Gene Clines in 1973. Clines, a fourth-year outﬁelder with the Pirates, was on ﬁrst base in a game against San Diego; with a full count on the hitter, he took off for second. The pitch was taken for ball four, but instead of simply strolling to second, Clines— who never peeked homeward to assess the situation—proceeded full speed ahead. Padres shortstop Derrell Thomas waited until Clines was nearly atop the base, then inexplicably threw his glove down as if a late throw were about to arrive. Clines, ﬂustered, went into a hurried slide and badly injured his ankle. “That play right there cost me a lot of time,” he said, still angry at the thought more than three decades later. “I never fully recovered for the rest of that year.” Clines, batting .291 going into the game, missed three weeks, and hit just .227 in the two months thereafter.

All in all, a well-timed—and well-executed—deke is an under-appreciated thing of beauty.

There’s more than one reason, after all, that Robinson Cano is an All-Star.