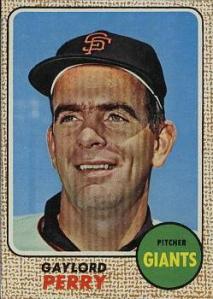 Gaylord Perry recently discussed his 1968 no-hitter, thrown against St. Louis when he played for the Giants. Perry brought a new layer to the discussion about how players (and, in this case, officials) react to significant accomplishments as they unfold on a ballfield.

The final hitter he faced, Curt Flood, struck out looking. Of course he did.

As with Wendelstedt, most everyone appreciates greatness. They’d also like their appreciation of it returned. From The Baseball Codes:

The more a pitcher mows down the opposition, the more the opposition is expected to respect the feat. Cardinals outﬁelder George Hendrick did exactly this in 1984, when he stepped to the plate with two outs in the ninth inning against Reds ace Mario Soto, who had yet to allow a hit. Hendrick stood passively and watched the ﬁrst two pitches of the at-bat split the plate for strikes. Rather than go for the kill, however, Soto inexplicably used a third-pitch fastball to buzz Hendrick’s chin, knocking him to the ground. The slugger got up, slowly returned to the box, and knocked Soto’s next offering over the fence in left ﬁeld. “I don’t know why he did that,” Hendrick said afterward. “I was going to let the man have his no-hitter.”

Players aren’t always so generous. When Detroit pitcher Tommy Bridges was within an out of a perfect game against the Senators in 1932, Washington manager Walter Johnson—despite trailing 13–0—sent up curveball-hitting specialist Dave Harris as a pinch-hitter, to try to ﬁgure out the bender with which Bridges had bafﬂed Washington all afternoon. Harris connected for a single, and Johnson absorbed criticism from around the league. Bridges himself abstained, however, saying, “I would rather earn it the competitive way than have it handed to me.”