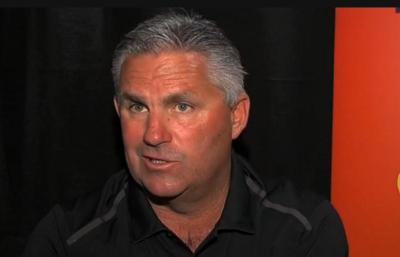 Kevin Towers did a lot of things with his weekly show on KTAR 620AM in Phoenix on Tuesday.

He showed why open discussion of baseball’s unwritten rules from an insider’s perspective can a bad idea.

He illustrated the gap between a normal response to a situation, and a baseball response.

And, in case any doubt remained, he proved conclusively that he holds some old-school opinions when it comes to this kind of thing.

In discussing the team’s lack of retaliation last season when provoked—on the same day that he fired D-Backs pitching coach Charles Nagy, no less—Towers intoned that he expected more from his pitchers when it comes to keeping the opposition honest.

“Come spring training, it will be duly noted that it’s going to be an eye for an eye and we’re going to protect one another,” he said. “If not, if you have options, there’s ways to get you out of here and if you don’t follow suit or you don’t feel comfortable doing it, you probably don’t belong in a Diamondbacks uniform.”

Towers referenced his team’s 8-1 loss to the Dodgers on Sept. 9, specifically the behavior of some Los Angeles players as they celebrated a six-home-run game in their dugout. It did not make him feel respected.

Because, you know, in his sport, justice is meted out by throwing baseballs at a guy.

He went on to describe a moment later in the month when first baseman Paul Goldschmidt was drilled, but Arizona pitchers did not respond. Towers: “Goldy gets dinged, and no retaliation. It’s like, ‘Wait a minute.’ If Goldy’s getting hit, it’s an eye for an eye. Somebody’s going down or somebody’s going to get jackknifed.” (As noted by Hardball Talk, Wade Miley was the pitcher all three times Goldschmidt was drilled last season.)

It made for captivating radio. It also earned the GM national attention, and not in a good way. Yesterday he circled back to clarify that “going down” and getting “jackknifed” are distinct from getting drilled. (Which is true, even if it’s difficult to square with his personal inclination to throw baseballs at the Dodgers.)

He cited an instance in which the Padres retaliated for a batter hit by Arizona closer Heath Bell by throwing inside to Aaron Hill.

“The bat went up in the air and it knocked him off his feet,” Towers said. “I said, ‘You know what, that’s baseball.’ They weren’t trying to hurt Aaron Hill. They were protecting their player. It was pitched in with purpose to send a message. I applaud that, and that was from the other club. It’s the way baseball is played. He ended up getting him out on the outer half because he took away the inner half.”

Ultimately, it’s a stretch for an old-school baseball guy to expect that most people outside the game will understand his perspective on the subject (especially if he devolves into prattle about throwing knockdown pitches from the stands). One of Towers’ problems, of course, is that even the people within his own organization didn’t seem to understand him. He wasn’t pleased with Kirk Gibson’s lack of response when players were thrown at this season, and the topic played a role in his dismissal of Nagy.

The idea of retaliatory pitches can be debated all day and into tomorrow, but Towers’ comments planted him within the baseball mainstream. The unwritten rule he broke was in talking about it in anything other than platitudes to begin with.