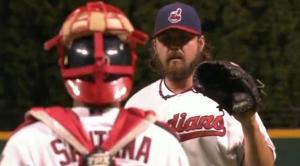 It’s one thing to listen to voices outside the clubhouse maintain or refute the propriety of Davey Johnson’s decision to have Rays reliever Joel Perralta ejected from a game last week because he had pine tar on his glove.

Tampa Bay manager Joe Maddon publicly questioned the wisdom of the move, but his is obviously a biased opinion. Now we have some clarity from an unaffiliated source: Cleveland closer Chris Perez.

“If before every game if they stopped and checked everybody’s gloves or something there would be one or two guys on every team that would just get popped,” he said in an Associated Press report.

Which is exactly the point. Washington’s No. 4 starter, Edwin Jackson, spent three seasons in Tampa Bay under Maddon. Does he have any secrets Maddon might be able to exploit? Jonny Gomes was a member of the Nationals last season, but spent six years prior to that with the Rays. If he has any dirt on Washington, he could well have passed it along to his friends in Tampa. Would it be appropriate for Maddon to use this information punitively?

“It’s probably sticking in their craw a little bit,” said an anonymous former manager and executive in the Washington Post. “They love the guy. He pitched on short rest for the Nationals. They grew to respect him. Then the plug gets pulled on him

“I think the Rays are more mad about somebody calling them out,” said Perez. “It had to be somebody that knew—that used to play with them. I have old teammates that I could tell (manager) Manny (Acta) to call out, but I’m not going to. It’s not bush league, but it’s still not on the up and up.”

Perez clarified that he was not speaking specifically about the habits of any of his former Cardinals teammates, who were nonetheless quizzed in the AP story. The most outspoken of them was Kyle Lohse, who mirrored Perez’s opinions. “If you’re going to start throwing guys under the bus, then you’d better be sure there’s nobody on your own team doing it,” he said. “That’s all I have to say.” 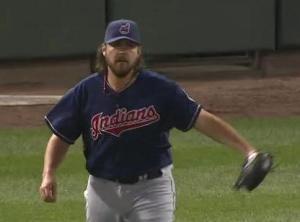 Old school, meet new school. On-field celebrations in baseball have become commonplace, mostly in the form of home plate scrums around a guy who has just scored the winning run. It’s gone from unheard of to accepted with the span of just a few years, and, Kendrys Morales aside, nobody has much of a problem with it.

The primary factor in this recent acceptance is that it’s celebration of a victory. (Such a display mid-game would be taken very differently.) It’s also why the one position that can get away with comparable shenanigans is a closer, following the final out of a win. Think Dennis Eckersley’s six-shooters, or Brian Wilson’s crossed-arm salute.

In that regard, Cleveland closer Chris Perez isn’t so unique, freely exuberating on the mound following a job well done.

Well, he did his job on Thursday, and Alex Rios didn’t appreciate it. Perhaps it was because Rios had just made the final out of the game, grounding to shortstop Asdrubal Cabrera to close Cleveland’s 7-5 victory over the White Sox. Perhaps it was because Perez was not just gesticulating, but yelling in celebration. Maybe it was because the pitcher had also snuck in a self-congratulatory fist pump after striking out A.J. Pierzynski a batter earlier.

No matter, Rios barked at Perez as he returned to the Chicago dugout in a clear display of displeasure and frustration. (Watch it here.)

“Well, I don’t know what was wrong with [Perez],” said Rios after the game, in an MLB.com report. “He just started yelling for no reason. I don’t know why he started yelling, and that’s it. When I hit that ground ball, he was yelling when [Cabrera] was throwing to first. He was yelling the whole way. I couldn’t tell what he was saying. He was just staring and saying something.”

Because Perez does this kind of thing frequently, it’s unlikely that his comments were directed toward Rios or the White Sox. According to Rios, that hardly matters. “If he was celebrating, that was not the right way to do it,” he said.

Which is what makes this juncture in baseball history so interesting. A generation ago, Rios’ sentiment would have been gospel. Eckersley and a few rogue pitchers aside, players generally had better control of their celebratory quirks. Today, with enforcers like Nolan Ryan—who would voice his displeasure through any number of fastballs thrown at an opponent who had just shown him up—increasingly rare, acts like Perez’s are common.

It’s the game as we now know it. Seems like it’d behoove Alex Rios to come to grips with it. 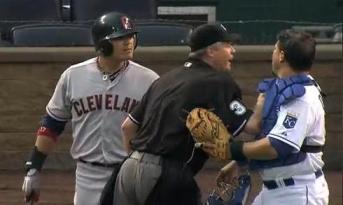 Baseball has an early clubhouse leader in on-field sensitivity, by his own admission no less, a particularly notable event considering that we’re barely a week into the schedule. Ladies and gentlemen, Mr. Shin-Soo Choo.

Choo’s sensitivity training began on opening day, when he explained his angry steps toward the mound in response to Toronto reliever Luis Perez buzzing him with a head-high, inside fastball as being a lingering function of having his thumb broken by a pitch last season.

“Maybe that’s why I’m sensitive right now,” he said at the time. “But I know it’s part of the game.”

It came full circle on Saturday, when the pitcher who had broken his thumb, lefty Jonathan Sanchez—then with the Giants, now with the Royals—faced the Indians for the first time since the incident. In the third inning, he hit Choo again, this time above his right knee. Choo shouted at the pitcher and, he said in a Cleveland.com report, “told him to throw it over the plate.” (Watch it here.)

It was enough to empty the benches, at which point crew chief Gary Darling issued warnings to both teams.

Choo later confronted his sensitivity in the Kansas City Star, admitting that, especially as it concerns getting drilled by Sanchez, “maybe I am a little bit sensitive.”

In this case, so too were the rest of the Indians. Cleveland starter Jeanmar Gomez drilled the next member of the Royals to come to the plate, Mike Moustakas, again drawing the benches onto the field. Both Gomez and manager Manny Acta were ejected, as was third baseman Jack Hannahan, who tried to get at Moustakas in the scrum.

(Afterward, Gomez insisted that he was “trying to open the inside corner” so as to “work the outside part of the plate.” Of course he was. In the other clubhouse, Sanchez issued a similar—though more plausible—denial: “I’ve got a guy on first—why am I going to hit somebody? You’ve got to be a professional and take your base. He knew it wasn’t on purpose.”)

This is where the balance between appropriate teammate protection and game consideration comes into play. Choo was likely delighted by Gomez’s strike; Hannahan clearly was. Because Gomez chose to stand his ground with a warning hanging over him in the third inning, however, he forced his team into emergency maneuvers. “He was trying to protect his teammates, but I think he went overboard a little,” said Acta. “There was a warning in place. Once you hit a guy, you’re going to be thrown out. That early in a game, you tax the bullpen.”

Ultimately, the best retaliation came from Choo himself, when he laced a two-out, two-run double off the center-field wall in the 10th inning, providing the difference in Cleveland’s 11-9 victory. In so doing, he also proved that he is not prone to being sidetracked by extracurricular distractions.

After the game, Indians reliever Chris Perez—who earned the save on Saturday—kept things alive on Twitter, referencing Kansas City’s team slogan, “Our Time,” in a Tweet: “Huge team win tonight; time for a sweep to tell the Royals it’s not “Our Time”, it’s #TribeTime. P.S. You hit us, we hit you. Period.”

“We’re tried of watching our guys wear it,” Perez said the following day in the Kansas City Star. “It happened (too much) last year, and we’re not going to stand for it this year.”

These are fine claims for a blustery pitcher seeking to send a message, but for Cleveland’s closer—who will virtually never have the chance to follow up on his threat, based on the fact that he appears almost exclusively in close games—such claims set an unenviable precedent for his teammates to follow up on his behalf.

Cleveland won a 13-7, incident-free series finale on Sunday, but the teams face each other 15 more times this season, presenting a very good likelihood that Jonathan Sanchez starts at least one of those games. He should by now recognize the increased combustion factor should he come anywhere close to Choo; for a guy who’s built significant amounts of success on being affectively wild, it’ll be interesting to see how this reality affects him.

Update (4-18): Gomez has drawn a five-game suspension for his actions. Seems that hitting a guy intentionally is one thing; doing so after an umpire specifically told you not to is something else.