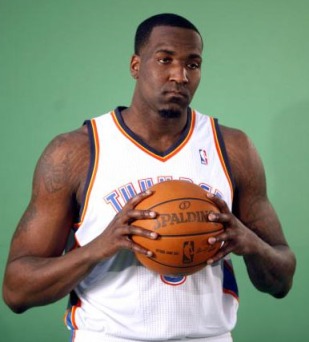 A generation ago, the unwritten rule banning fraternization inside the opposing clubhouse was rock solid. Reds manager Bob Boone once ejected former Reds player Lenny Harris while the latter was trying to visit some old teammates on the Cincinnati side of the building. Dan Gladden kicked White Sox outfielder Bo Jackson—Bo Jackson!—out of the Twins clubhouse while he was trying to visit Kirby Puckett. Pedro Martinez received an earful for stopping to greet some compatriots on the Blue Jays in the visiting clubhouse at Fenway Park, despite the fact that he had been led into the space by security guards trying to give him an unobstructed path to the field from a pre-game promotion he had been attending.

Apparently this ethic carries over to the NBA, as well. According to Anthony Slater, who covers the Thunder for the Oklahoman, the following exchange took place when Chicago’s Joakim Noah made camp in the Thunder locker room following last night’s game:

So Noah left, apparently with the full approval of a majority of Perkins’ teawmmates. (Read a far more robust report here.)

Even though in baseball this rule, like so many others, has grown lax over the years, the incident calls to mind an occasion that served to introduce the topic in the first draft of The Baseball Codes. (The entire chapter was later cut for space considerations.)

Unlike Noah, there were places that former A’s catcher Jason Kendall refused to go.

Kendall had some time to kill. Wearing jeans, a t-shirt and a nondescript baseball cap, he leaned against a wall in the bowels of the Oakland Coliseum. And waited.

That night’s game against the Kansas City Royals had ended an hour earlier, time enough for the A’s catcher to shower and dress. His father was in town and the two had dinner plans. The younger Kendall was clearly early.

It wasn’t like his father was far away. In fact, Fred Kendall was less than 20 feet removed, on the other side of a door just steps from where his son stood waiting. But Jason Kendall wasn’t about to go get his old man.

Because Fred Kendall, a former big-league catcher himself, was Kansas City’s bullpen coach. A member of the other team. And as easy as it would have been to kill some time by walking through the door to the visitor’s clubhouse for a chat with some of the few people on the planet as devoted to baseball as himself, it was something that Jason Kendall could not do. He knew the rule, and the guy who taught him the rule, Fred, would hardly tolerate such behavior.

Had it been either of Fred’s other two grown children, a ballpark visit would be no big deal. But Jason wore green and gold for a living, not blue and white.

So he stood in a hallway, waiting.

Not sure how this translates to the NBA at large, but it seems like something with which  Kendrick Perkins can get right on board.