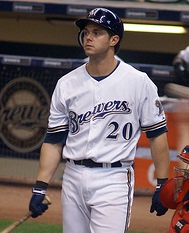 Welcome back to the big leagues, Frank Catalanotto! Or at least to the minors, with a chance to make the 24-man roster out of spring training!

The 35-year-old Long Island native signed with the Mets, with the chance to make the roster out of spring training, after spending last season with Milwaukee. New York likes him for his versatility, and although the Mets’ infielders are hardly green (only one on the current 40-man roster is as young as 25), should he make the team, his experience there will only help.

He told us about a lesson he learned on the topic of basepath retaliation when he was a rookie in 1997.

My rookie year, in 1997, I was playing second base with the Detroit Tigers, when we hit Tony Phillips. Sure enough, there was a ground ball to the left side, and I remember Tony came in real hard, knocked me almost into left field. It’s not that he wanted to hurt me personally, he didn’t even know me, but he wanted to send a message—hey, you get me, I’m going to get you back.

But Tony was very professional about it. He kind of helped me up, patted me on the butt, asked me if I was OK. Sometimes it’s part of the game and you know it’s going to happen.