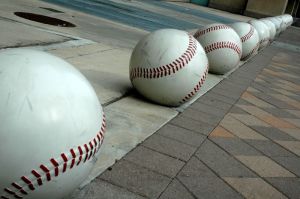 We’ve already seen the fine line between acceptable and unacceptable cheating in baseball this year, when Phillies bench coach Mick Billmeyer pulled out some binoculars to home in on the signs being put down by Rockies catcher Miguel Olivo. Billmeyer crossed the line of propriety clearly drawn by the Code, leaving the field of play and using external devices to further his cause.

Something similar has allegedly been happening for some time in Colorado, only this time the Rockies are the perpetrators.

The Rockies employ a humidor to store their balls, for the purpose of keeping them moist and heavy, so as to help negate the thin-air effects of Coors Field. According to Miller, however, the team has possibly been integrating non-humidor balls into the late-inning selection, especially during games in which the Rockies trail.

“There’s a feeling that the Rockies are doing something with the humidor-stored baseballs, and sometimes late in games when the Rockies need help, that some non-humidor baseballs slip into the mix,” he said. “Nobody has been able to prove it.”

Central to Miller’s thesis is the July 6 game in which Colorado scored nine runs in the bottom of the ninth to beat the Cardinals, 12-9. Miller alleged that the Giants felt similarly last time they visited Coors Field. (The Rockies scored the final three runs of games against the Giants on July 1 and 2, both victories for Colorado.)

Still, this sort of home-field advantage (if that’s indeed what it is) is hardly new in baseball. In fact, if it happened at all, it wouldn’t even be the first illegally institutional authorized altering of baseballs.

In 1965, White Sox groundskeeper Gene Bossard stored baseballs in a humidified room, resulting in baseballs not unlike those found in the Rockies’ humidor. (Unlike the Rockies, Bossard was also known to freeze baseballs, to further deaden them.)

Whereas Colorado is trying to counteract the effects of its stadium, however, Bossard was looking to take advantage of the fact that the White Sox were a pitching-heavy team that could hardly hit dry baseballs, let alone wet ones, so deadening them hardly made a difference.

Bossard also kept the territory in front of the plate as bog-like as possible, the better to assist the array of grounders its sinkerball staff was bound to throw. (It was known, appropriately, as “Bossard’s Swamp.” If a sinkerballer was pitching for the visiting team, however, the White Sox grounds crew would actually mix gasoline with the clay around the plate and then set it on fire, the better to harden it.)

Bossard learned at the feet of his father, former Indians groundskeeper Emil Bossard, who was known to push back the portable fences at Cleveland’s Stadium by as many as 15 feet, depending on how much power the opposing team displayed.

“It’s gamesmanship,” said longtime manager Chuck Tanner. “It’s just what was done. You’d adjust to it. You’d bitch about it, but, you’d deal with it all the same.”

The Twins seized home-field advantage in the 1980s, by manipulating the air conditioning system in the Metrodome so that it blew out when the Twins batted, and in when the opposition came to the plate. (In 1987, remember, the Twins won the World Series without winning a single game on the road.)

This sort of list goes on and on. There was “Ashburn’s Ridge” in the 1950s, a sloped baseline that allowed Philadelphia’s excellent bunter, Richie Ashburn, to keep his offerings fair. (He won the batting title in 1955, hitting .338.)

Teams water down the infield to slow down fast opponents and alter the length of the grass to help or hinder a fast team (depending on whether they have one), among many other tricks.

The difference between most of these examples and what the Rockies allegedly did is that the field alterations are in play equally for both teams. Even though they might benefit the home club (or disadvantage the visitors), both teams must deal with the quirks equally.

Selectively feeding baseballs to the umpire hardly fits that bill.

It’s a difficult allegation to prove, but if the Rockies are doing it and know what’s good for them, they’ll adhere to the Code, which in this case says, once you’re caught cheating, stop.