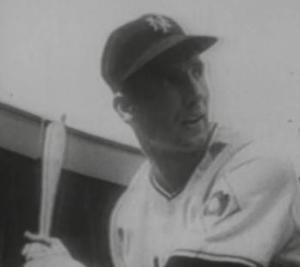 Bobby Thomson, who passed away yesterday, held an unusual place in baseball. Not a Hall of Famer, not even a superstar, he was nonetheless legendary, with his Shot Heard ’Round the World augmenting a long and successful career, during which he resided at the heart of the Giants’ batting order for his five best seasons.

Thomson will be forever linked to Ralph Branca, the Dodgers pitcher who served up the homer that’s kept them both famous. It was, and will always be, among the greatest moments in baseball history.

It’s also unique, in that its intrigue has grown over recent years, a half-century after it happened, as new information came out about the Giants’ proclivity for stealing signs that season, and questions arose about whether Thomson might have been signaled in advance of Branca’s fateful pitch.

None of it can detract from the gravity of the moment, or serve to deny Thomson his rightful place among baseball’s legends. Still, it’s a tale of Code-based intrigue, and brings new wrinkles to an otherwise well-worn story.

The original draft of The Baseball Codes offered a lengthier examination than was ultimately published. Today seems to be a good time to offer it up here.

Without question, the most infamous sign-relay system in baseball history—which inspired countless newspaper accounts and its own book-length examination—was the one used by the New York Giants at the Polo Grounds in 1951. That was the year of baseball’s greatest home run, Bobby Thomson’s “Shot Heard ’Round the World,” which capped the Giants’ return from a huge August deficit to beat the Brooklyn Dodgers in a three-game playoff and earned them a trip to the World Series.

The Giants’ system had been kept largely secret for a half-century, but was uncovered in 2001 by the Wall Street Journal’s Joshua Prager, who later wrote a book on the subject, “The Echoing Green.” Prager found that after a particularly rough stretch in mid-July 1951, New York manager Leo Durocher implemented a system with which the Giants expertly stole their opponents’ signs for the final 10 weeks of the season. During this stretch, New York went 40-14, after a solid if unspectacular 56-44 mark from April through July.

The Giants’ home ballpark, the Polo Grounds, offered the perfect setup for such a scheme, as the windows of the center-field clubhouse faced the field, giving a spotter a perfect sightline to the plate. It wasn’t exactly revolutionary to steal signs from that clubhouse—Bill Veeck alleged that as far back as John McGraw the team had someone looking through binoculars from that same vantage point, who would either raise or lower a shutter to signal the pitch.

The positioning was so favorable that even visiting teams used the setup to their advantage. Gene Mauch recalled that as a little-used infielder with the Cubs in 1948, he’d sit with a pair of binoculars in the Polo Grounds visitors’ clubhouse (located alongside the home locker room, it also had windows overlooking the field) and pick up the Giants’ signs. Mauch’s signal to Chicago’s hitters was a large can of peach nectar that he’d move back and forth across the sill—to the left for a curveball, to the right for a fastball and in the middle for a changeup. Because it was the Cubs, however, the signals were usually of little assistance. “I remember one game when Walker Cooper was catching and Dave Koslo was pitching (for the Giants) that I called every pitch,” he said in the Los Angeles Times. “I think we got three hits and one run.”

Mauch wasn’t the only Cub that season who knew his way around a spyglass. There was also Hank Schenz, who split duties with Mauch both at second base and behind the team’s binoculars. When Schenz, a journeyman, joined the Giants three seasons later, he appeared to be a good fit for the system that Durocher was about to install.

It was an electric signal that ran from the Polo Grounds’ clubhouse to the home bullpen. With it, someone sitting near the Giants’ locker-room window could press a button, which buzzed a bullpen phone. The system was simple and effective—no matter how hard anyone looked for an illicit signal coming from behind the center-field window, they wouldn’t see a thing. One buzz for fastball, twice for off-speed was the code.

Schenz was on the New York roster for the final two months of the season, during which he never came to the plate—possibly because he spent so many innings watching games from behind the clubhouse window. He was one of the first to man the buzzer, but much like his play on the field, his desire outstripped his talent, and he experienced occasional difficulties in properly decoding the opposition’s signals. The binoculars were soon passed to Herman Franks, a young coach whose days as a catcher had ended two seasons earlier (and who would go on to a long and storied career in sign thievery from the coaching ranks).

When the buzzer sounded, a bullpen member signaled the hitter, often with an indicator so subtle that it would go unnoticed by the opposition. Bullpen catcher Sal Yvars, for example, was said to occasionally tip fastballs simply by not moving at all. For something off-speed, he’d do something clearly visible from the plate, like stretch or toss a ball into the air.

(There is some debate about this. The Polo Grounds bullpens were 454 and 447 feet from home plate, making it questionable as to whether someone would be able to see a stretch or tossed baseball well enough to interpret it—to say nothing of the fact that, because of its notoriously bad drainage—the park’s site was actually shown to be lower than the adjacent Harlem River in an 1870’s map of the area—there was a significant dropoff to the outfield. The grade was so extreme that the managers in the dugouts could only see their outfielders from the waist up, which makes it even less likely that Yvars, at 5-foot-10, was easily visible from home plate. What’s beyond question is that the system—whatever it was—worked well.)

Durocher’s buzzer was of little use at first, as shortly after it was installed the Giants went on a 17-game road trip, during which time they dropped from eight games behind Brooklyn to 12 1/2 games back. New York was struggling as the Dodgers surged. “The Giants,” proclaimed Brooklyn manager Charlie Dressen, “is dead.”

The team returned to the Polo Grounds on Aug. 11, and a loss to open the homestand dropped them 13 ½ games back. This was the Giants’ first extended stretch with buzzer under hand, however—21 out of 24 games at home—and they subsequently took off, winning three straight from Philadelphia, then three more from the Dodgers. Three straight over Philly on the road. Two victories over Cincinnati, one from St. Louis and a four-game sweep of the Cubs gave New York 16 straight wins and brought the club to within five of the Dodgers.

The Giants never would have caught Brooklyn had they not won 14 of their final 18 road games in addition to their home success, but, as evidenced by Gene Mauch’s can of peach nectar with the Cubs, it’s clear that teams don’t need to be playing at home to steal signs from outside the field of play.

The Giants eventually tied the Dodgers atop the standings, and the season culminated in a three-game playoff. After splitting the first two, the Dodgers took a 4-1 lead into the ninth inning of game 3, setting up Thomson’s heroic home run to clinch the pennant. While since admitting to the sign-stealing scheme, however, the slugger has long denied—if sometimes half-heartedly—that he was tipped off to the pitch he hit out.

Branca was told about the Giants’ system in 1954, three years after Thomson’s homer, but never commented on it—even when a bylined article by Jimmie Piersall, then with the Washington Senators, in the May 1962 issue of Baseball Monthly, suggested that the hitter knew what was coming. (“Thomson says it never happened,” wrote Piersall, “but I’ll bet he could get an argument out of Ralph Branca, who threw the pitch.”)

It wasn’t until Prager reported on the entire affair that Branca broke his silence.

“When I heard those rumors and innuendoes, I made a decision not to speak about it,” Branca said in the Wall Street Journal. “I didn’t want to look like I was crying over spilled milk. Bobby and I are really, really good friends. He still hit the pitch.”

The baseball world is a bit poorer today.