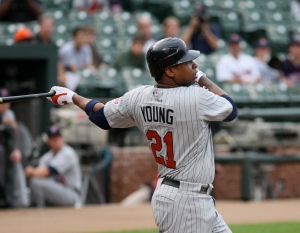 The thing about retaliation is that its genesis can occasionally be difficult to pinpoint. In an attempt to score against the White Sox on Tuesday, Minnesota’s Delmon Young ran into White Sox catcher A.J. Pierzynski. Instead of sliding or attempting to bowl Pierzynski over, however, Young—who was out by several steps—went out of the baseline to throw his hands hard into the catcher’s face. (Watch it here.)

There was little chance of success on the play—Young didn’t even try to dislodge the ball—but he might have earned a degree of satisfaction. Perhaps it was a grudge against Pierzynski (which would hardly be shocking, given the general frequency of grudges against Pierzynski), but  it more likely had to do with a preceding pitch from reliever Sergio Santos, which Twins shortstop J.J. Hardy had to duck to avoid.

Santos is one of the game’s harder throwers; the pitch in question was a 94 mph fastball. There were two outs and first base was open—a great situation in which to drill a hitter.

If that pitch was indeed intentional, it was itself serving as retaliation, stemming from last week’s series between the teams, during which Chicago’s Carlos Quentin was hit three times.

Two of those pitches were thrown by Glen Perkins on Wednesday. After the second (which following an earlier Quentin homer) warnings were issued to both benches, spurring White Sox manager Ozzie Guillen to launch into a post-game diatribe during which he suggested that Perkins meant what he did.

“Everybody knows when you’re hit on purpose,” he said in the Chicago Sun Times. “To me, in my opinion, did this kid throw at the guy [Wednesday]? I don’t know, but in that situation it was so obvious and everybody thinks about it that way. He’s the only one who knows. But being in this game so long, first base open, a lefty behind him, he got his ass kicked, go hit the guy.

“I told my players, if you have any problems about somebody hitting you and you don’t like it, go get it and we’re behind you. I’ll be the first one behind you and I will protect you. I said in the [spring training team] meeting, ‘Don’t hit any players because you stink. Because one of the players might get hit, Get people out. But if you see somebody and you want to take care of yourself, that’s up to the players.’ ”

Guillen’s opinions, reported the Minneapolis Star-Tribune, were issued “despite the fact that Quentin stands close to the plate, leads the league in being hit by pitches and that the umpire was calling inside pitches off the plate for strikes that night.”

(For his part, Santos issued an emphatic denial. “If I was trying to hit someone, I would aim for the leg or the butt,” he said in an MLB.com report. “I was a hitter for many years and taking a baseball to the head is nothing to fool around with. I’ve had my fair share of 96- or 97-mph pitches in the back and legs. It is what it is and you move on. The last thing I want to do is hit someone in the head. I wouldn’t do that to my worst enemies. It got away and luckily it didn’t hit him.”)

Chicago’s bullpen coach, Juan Nieves, fueled things further with a burst of verbal bluster on WSCR (670 AM) in Chicago, saying that the White Sox weren’t afraid of the Twins, despite having lost 19 of the last 25 meetings between the clubs.

“There’s nothing that would please me more than having a brawl with them and kicking their rear,” he said on the air. “I’ve even thought of telling guys, ‘Hey [Matt] Thornton, smoke [Joe] Mauer, see if you can start a fight.”

This cumulatively represents a lot of calories burned on the subject of retaliation—how it’s delivered, and how it’s accepted—but if the goal of Perkins, Santos, Young or Nieves was to start a fight, all parties came up short.

Guillen even went so far as to offer backhanded praise to Young’s baserunning efforts. After calling the play “unnecessary,” he told the Chicago Tribune that “I like when baseball is aggressive. If anyone has a problem with that, there’s still a way they can resolve their problems.”

The way in question, according to many prognosticators, should have involved putting a baseball into Young’s ribs or thigh during the following day’s game. (Young had come up two innings after his non-slide, to lead off the 10th, but with Thornton trying to protect a 6-5 lead, it was hardly the time to send a message.)

Wednesday rang no different, however. In five at-bats, Young collected three hits (including a home run), scored two runs and was hit by precisely zero pitches.

This brings up interesting discrepancies when examining Guillen’s earlier comments in the Sun Times.

“I will protect my hitters myself,” he said in that report. “If I see somebody throw at somebody and I think it was on purpose, they will get hit. I guarantee it. Then, I’ll take my responsibility with fines and whatever they want to do.”

Perhaps Young’s non-slide doesn’t fall into the same category as throwing at somebody. Perhaps there was enough doubt about Perkins’ drilling of Quentin to give Guillen pause. That this is the same manager who has been known to order retaliatory strikes—see Tracey, Sean (find the reference within this story about Vicente Padilla—makes his hesitance in this instance peculiar.

In the end, the White Sox’ position was best summed up by pitching coach Don Cooper, who had earlier denied any part in ordering retaliation, in an MLB.com report.

“Let’s just keep our focus about winning games,” he said. “That’s the only thing that really matters.”