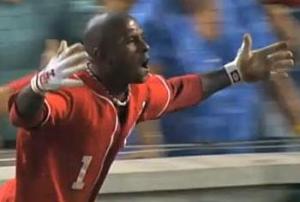 It’s said that in the middle of a bang-bang play, where rational thought is subverted in favor of pure instinct, a man’s true colors can be seen.

If this is true, it doesn’t reflect well on Nyjer Morgan.

That Morgan was waived around in the first place, with his team holding a six-run lead, was acceptable, as he was so clearly safe that first baseman Albert Pujols, serving as the cutoff man, didn’t even bother to throw home.

However, with catcher Bryan Anderson venturing up the line toward first, his back to the plate and moving away from the play, Morgan inexplicably lowered his shoulder and went out of his way to barrel into him.

So far out of his way, in fact, that he never touched the plate. When Nats catcher Ivan Rodriguez, who had just scored, grabbed Morgan at the edge of the cutout and spun him around to double back, he violated the rule stipulating that players can not be touched by a teammate in the middle of a play. The run was subsequently wiped off the board. (Watch it all here.)

That, however, was the least of Washington’s worries.

How serious was the display? One of a manager’s primary responsibilities is to shield his players from undue scrutiny, refraining from leveling public blame even when he’s making a pastime of tearing them apart behind closed doors.

Nationals manager Jim Riggleman didn’t even offer a pretense of protecting Morgan. After apologizing to both Anderson and Tony La Russa after the game, he delivered a number of choice sentiments about his center fielder to the press. Among them, as reported by Nationals Daily News, was that Morgan did an “unprofessional thing,” and, indicating that lessons will be learned, that “you’ll never see it again” from him.

Most interestingly, Riggleman chose not to skirt the fact that La Russa will almost certainly be motivated to retaliate, and went so far as to say that he’d do the same thing were it his player at the wrong end of the collision.

“I can’t minimize [the incident], because if I take the approach that there’s nothing wrong with it, we’re gonna get people hurt on the field,” he said. “There’s gotta be retaliation. If Nyjer was playing today, he’d get hit. If an opposing player did that to my catcher and came to the plate, he’d get hit.”

At least Riggleman had his player’s interests in mind on Sunday, when he pulled him from the lineup for the teams’ final meeting until 2011 (at which point there’s a decent chance that La Russa will no longer be involved).

In the interim, the St. Louis manager appreciated Riggleman’s approach.

“They handled it internally, and they made it clear to us that it was a mistake,” he said in an MLB.com report. “The Nats did what they had to do to defuse it. Guys make mistakes. I made it a point not to say anything after the game. I didn’t say a word.”

Communication can go a long way in this type of situation. In 2006, Twins manager Ron Gardenhire apologized to Red Sox skipper Terry Francona after Torii Hunter swung at a 3-0 pitch with his team holding an 8-1 lead in the eighth inning. An act that any pitcher could justify as retaliation-worthy was subsequently nullified, and no further action was taken.

In this case, we won’t know until next season how much weight Riggleman’s apology will hold.

We do know, however, that an off-season is hardly too long to wait for someone with retaliation on his mind.