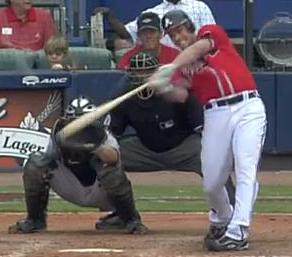 Chalk one up for the good guys.

Matt Diaz hit a game-tying, two-run homer for the Braves on Sunday, then flipped his bat in celebration. In cases like this, players are usually granted a degree of leeway, for celebratory purposes.

It wasn’t until he rounded the bases and took a gander at exactly how far he’d flipped it, however, that Diaz realized his actions might have been a bit too enthusiastic.

“Coming around third you see the dugout and you see the bat boy picking up the bat over by the dugout, like wow, did I do that?” Diaz told the Atlanta Journal Constitution after the game. “I didn’t know how far. It was ugly. There was a Sammy Sosa hop involved, with a Bret Boone bat flip, with a Paul O’Neill head-down-not-look-at-it but then look at it later.” (Watch it here.)

It wasn’t quite an apology to the pitcher, Leo Nunez, but it was certainly an admission of guilt—which can go a long way toward mollifying sensitive feelings, especially since the teams play again this weekend.

Then again, Diaz and Nunez were once teammates in Kansas City, and Diaz thinks he has a handle on the pitcher’s state of mind.

“Leo is a high emotional pitcher anyway, and when he has a big strikeout, he’ll let you know it,” he said. “Those guys usually understand guys who get caught up in emotion and do something like I did yesterday.”

It wasn’t recognition of the Code quite along the lines exhibited by Michael Saunders earlier in the year, but the guy dropped a Paul O’Neill reference. What more can one reasonably ask?

2 thoughts on “When Bad Things Happen to Good Players”