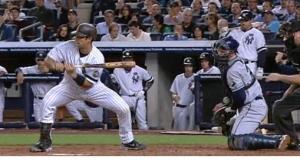 Maybe he was just trying to take some heat off his captain. More likely, this kind of thing happens more often than we think, but we’re paying attention now.

Either way, Jorge Posada took first base last night after not being hit by a pitch.

Of course, the sum of Posada’s histrionics involved taking off his shin guard and offering a slight grimace, not hopping around and wincing to the point that medical intervention was necessary. (Watch it here.)

It was an 0-2 pitch from Tampa Bay’s James Shields that skipped on the ground in front of Posada’s feet. He hopped back, never indicating that the pitch did anything but hit him. The relative lack of outcry compared to the recent Derek Jeter incident could have also had to do with the fact that there were already two outs, Posada never scored, and the Yankees won handily anyway, 8-3.

Still, it’s a reminder to all those who bandied about the phrase “Derek Cheater” this week that this is something heady ballplayers do.