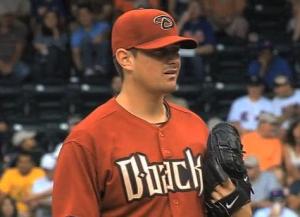 Looks like Diamondbacks starting pitchers learned a lesson. In talking to Arizona radio station Sports 620, Daniel Hudson touched upon the fact that Justin Upton was hit by 19 pitches last season—second most in baseball.

“If it’s a starting pitcher [who hit Upton], remember, he’s got to hit,” Hudson told the station, according to ArizonaSports.com, the station’s Web site. “They either have to hit their spots, or expect something in return.”

Okay, that makes sense. What’s interesting is how Hudson and the rest of the staff came upon this realization. The right-hander said that the subject was raised “halfway through the year.”

There are some obvious follow-up questions: Who brought the subject up with him, and how? Was it an order (or at least a suggestion) from manager Kirk Gibson, or somebody else on the staff? Was it Upton himself, or another of the hitters? Were the pitchers called out in a group setting, or did it happen through individual conversations on the side?

This is all interesting stuff. The way a team communicates information like this can be as vital—if not more so—than the information itself. It should be noted that, for a staff chided halfway through the season for the dearth of protection it offered its own hitters, Diamondbacks pitchers drilled either nine or 10 batters in every month of the season, save for September, when they hit only six; they actually declined in that category in the second half. Even so, their total of 53 HBPs—28 by starters, 25 by relievers—ranked fourth in the National League.

There’s also the fact that Upton stands notoriously close to the plate, which certainly had something to do with the frequency of his drillings. (The next closest Arizona player was Miguel Montero, who was hit eight times; nobody else was touched more than four times.) Upton intoned at the team’s FanFest earlier this month that he’ll continue to stand atop the dish, so one can reasonably expect the frequency of his drillings to continue.

Was Hudson just blustering to try to make opposing pitchers a little more wary of pitching inside to Arizona’s best hitter? When the D-Backs make their way to San Francisco later this season, I’ll see if I can’t track down some answers.