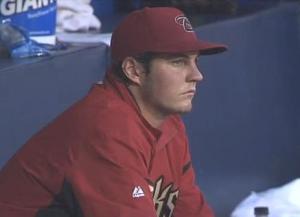 The Arizona Republic recently estimated that Diamondbacks pitchers shake off catcher Miguel Montero three or four times per game. Tuesday, however, was not like most games.

That’s because rookie Trevor Bauer—making only his second big league start—shook off the signs, said Montero, on “almost every pitch.”

That said, it was only 3 1/3 innings’ worth of almost-every pitches. Then again, giving up six hits, four walks and seven runs to San Diego necessitated 80 offerings from Bauer. Shaking off even a quarter of them would have made for an astounding number, for no reason more glaring than the fact that Montero is a seven-year vet with more than 4,000 innings behind the plate.

Bauer is unconventional, from his preparatory practices to his delivery, which is  all angles and torque. It doesn’t stop there. From the Republic:

While most pitchers try to pitch down in the strike zone, he prefers to work up in the zone. In the past couple of years, Bauer has worked to learn and incorporate a pitch-sequencing theory called “Effective Velocity,” a way of attacking hitters that aims to disrupt timing.

If there are benefits to Effective Velocity, they weren’t apparent Tuesday afternoon. In fact, Bauer might have inadvertently personified an ongoing disagreement between the old and new schools over whose methodoligy is more effective. It’s a tiny sampling, of course, but a  21-year-old just out of college appears to have put his think-tank strategy to the test at the expense of leveraging wisdom from a guy who knows the game.

There’s something to be said for execution (if Bauer doesn’t hit his spots, it doesn’t matter what kind of strategy he employs), but beyond that is the Code and its mandate that young players defer to veterans, at least until such time as they’re able to carry a significant portion of the load on their own.

Montero opted not to blast Bauer afterward, talking about the youngster’s talent and promise. Still,  he added, “I would like him to get a little trust in me. . . . I don’t have all the answers, but I probably know [the Padres’ hitters] a little bit better [than Bauer].”

For a guy carrying the old-school end of the argument, Montero’s response was anything but. For an example of real old-school when it comes to this stuff, turn to the the Red Sox clubhouse in 1967, after rookie pitcher Sparky Lyle, 22, shook off catcher Elston Howard—at age 38, a nine-time All-Star and the 1963 AL MVP—not once, but twice during the course of an at-bat, throwing sliders instead of fastballs, both out of the strike zone, en route to issuing a base on balls.

After the game, Carl Yazstrzemski cornered Lyle in the clubhouse. “I want to know one thing,” Yaz said to the rookie, as recounted by Lyle in The Bronx Zoo. “How can a guy who’s been in the big leagues two weeks shake off a guy who’s been catching fourteen years?”

To make sure the point wasn’t lost, manager Dick Williams then promised a $50 fine every time Lyle shook off Howard from that point on.

Bauer should be so lucky.