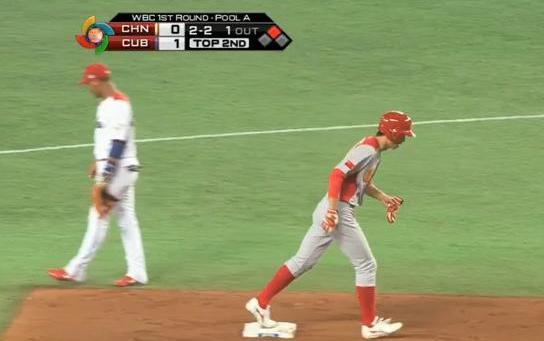 As a method of last resort, dekes can be an infielder’s best friend. They’re most frequently enacted in an attempt to slow a baserunner’s progress by making him think that the ball is somewhere on the diamond other than where it actually is–and can end up saving runs .

They are deceptive by nature, but, done right, are entirely by the book. (They’re especially by-the-book if the fielder plays no part in deking a baserunner who has clearly just been deked.)

Some explanation: In WBC action on Monday in Japan, Chinese baserunner Fujia Chu swiped second base following Cuban catcher Eriel Sanchez’s botched transfer of the ball to his throwing hand. Chu pulled into second as Sanchez was trotting toward the backstop to corral the ball, then, near the end of the play, inexplicably started jogging back toward first. (Watch it here.)

The initial impression: One of the Cubans told him it was a foul ball.

The more likely scenario, especially given the language barrier: Chu caught a glimpse of the ball in foul territory and made the assumption all on his own.

These are the kinds of things that happen to an inexperienced squad. (China was mercy-ruled, 12-0, in this game. Say no more.) The reason one never sees this happen in the big leagues is that runners are trained to look in to the catcher mid-stride to see the result of the play. Had he been aware of his surroundings, Chu might even have tried for third.

As it was, Cuba gets credited for a heads-up baseball play it likely had nothing to do with.

5 thoughts on “Oh, China: Runner Dekes Himself in WBC Action”