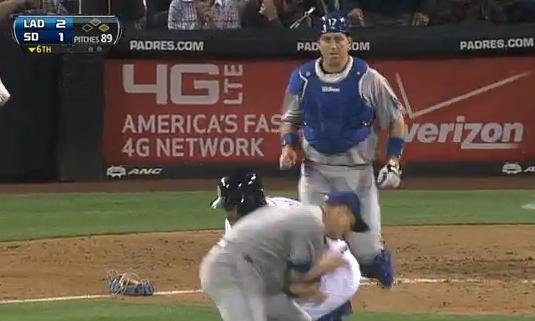 In the aftermath of Zack Greinke’s shoulder injury at the hands of Carlos Quentin, some criticism arose of Dodgers catcher A.J. Ellis for not moving more quickly to step between the two—an essential part of a catcher’s job when it comes to such matters. Ellis was unprepared for Quentin’s sudden rush toward the pitcher—and by the time he caught up, it was too late.

Yesterday, Greinke absolved him of responsibility.

“Anyone with the White Sox has always labeled me as someone who does stuff,” Greinke said in a Los Angeles Times story, recounting his encounters with Quentin when he was a member of the Kansas City Royals and Quentin with the Chicago White Sox. “I didn’t think it would happen. Looking back, I should have warned him.”

Greinke also said that the eight-game suspension levied upon Quentin by Major League Baseball seemed appropriate. “To expect the league to do more than that would be pretty crazy,” he said.

(In related news, Padres President and CEO Tom Garfinkel blamed the incident on Greinke and compared the pitcher, who has dealt with social anxiety disorder, to Rainman. There’s an entire chapter of the unwritten rules dealing with restraint from calling out one’s opponent in the press—or even at a meeting of season ticket-holders, which is where Garfinkel made his remarks—although it usually pertains to players, not senior management.)