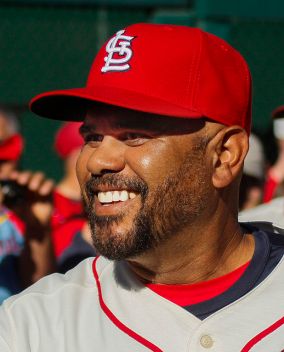 So Don Mattingly is peeved that the Cardinals were apparently interested in his team’s signs during last year’s NLCS. They were looking into the Los Angeles dugout, he told ESPN LA at the winter meetings. Runners at second may have been picking off catcher A.J. Ellis.

This is a weird one. This kind of thing not only happens all the time, to the extent that it’s accepted practice, but virtually every team does it to some extent. It’s a near certainty that the Dodgers do it themselves.

It’s weird because Mattingly doesn’t decry it outright, instead saying things like “We felt like we had to be sure we kept an eye on their first-base coach and their third-base coach,” and “[Third base coach Jose Oquendo] is a guy at third who’s always looking for my signs from our dugout.” Mattingly said it was on the Dodgers to stop it if was happening.

But if one possesses such entirely mainstream attitudes, why bring up the subject in the first place? These are the comments of a guy who says he has no axe to grind, even while he’s looking up from the axe grinder.

That said, let’s look at Oquendo for a moment. Back in 2008 or so, I interviewed him for The Baseball Codes. (He has been the St. Louis third base coach since 2000, and was the bench coach the season before that.) He addressed many of these issues, minus the part where he’s actually maximizing his team’s advantage:

“I steal signs every day as a coach. But one thing I don’t do, I don’t tell the hitters. Now, when somebody’s on base, I’m going to say to my runner when to run and when not to run. That’s part of the game. But I would never tell a hitter what’s coming. It’s respect. If a player asked me to do it, I would never do it. That’s my personal opinion, I respect the game in that way.”

So you sit on the coaching line and get the signs and use them to tell guys when to run?

“If I see a breaking ball, I know to have our guys steal. Or if a pitcher has a tell when he’s going to first, that stuff you take advantage of. To tell a hitter what’s coming, that’s never been my style. …”

How easy is it to steal signs, particularly if there’s a runner on?

“If nobody’s on base, I don’t even look at the signs. I don’t care with nobody on. Now with somebody on base, I might want to know if he is going to throw a pitchout, when they are going to throw to first, stuff like that. …

“I don’t “steal” the signs, I just see them. It’s pretty easy a lot of time—you see it from the catcher or from the pitcher. I’d say half of the catchers in the National League, I can see the signs from third base. [Mike] Matheny [then the Cardinals catcher, now the Cardinals manager] knows about it—he looks at me every time he’s going to put signs down. I drive him nuts at third base, but he knows that I’ll get it from him or from the pitcher. I’m gonna get it somewhere.

Draw your own conclusions.