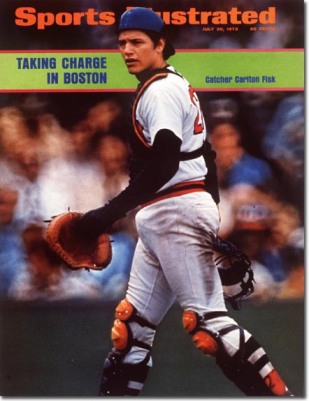 Research for my next book, about the OaklandA’s dynasty of the 1970s, to be published by Houghton Mifflin in 2015, has turned up boundless examples of unwritten rules from that bygone era. The latest concerns an intramural spat among the Boston Red Sox, and illustrates the idea that its usually a good idea for ballplayers to measure their comments to the media. From the Associated Press, Aug. 9, 1972:

Carlton Fisk is leading the Red Sox in home runs and batting average, and was a member of the American League All-Star team.

The Springfield Union quoted the 24-year-old catcher as saying that teammates Reggie Smith and Carl Yastrzemski have not been hustling, nor have they demonstrated any leadership abilities. The story was picked up by the wire services and blown up by the Boston press.

The Union article quoted Fisk as saying, “(Yastrzemski and Smith) don’t realize the effect they have on the club as a whole. When they aren’t as aggressive in the outfield or when they don’t show desire, the whole team droops.”

“I was severely misunderstood,” Fisk said last night before the Red Sox defeated the Indians, 4-1.

“I guess it’s a lesson to learn,” the easy-going catcher said. “But you have to learn the hard way, I guess. Maybe I’m too naive, I don’t know. I just won’t say anything to anybody anymore. I’m completely disenchanted. The story made it sound malicious when it wasn’t meant that way. I told Carl and Reggie it wasn’t meant like it appeared in the paper.”

Fisk, Smith and Yastrzemski met with manager Eddie Kasko for a 10-minute closed-door session before the game to straighten things out.

“As far as all parties are concerned, it’s a dead issue,” Kasko said. “Fisk explained that he was misquoted and misinterpreted and that he didn’t mean things the way they came out. The explanation was satisfactory to both Smith and Yastrzemski. Both of them know what kind of a kid this is. They know he’s not the type to go popping off.”

Smith was asked about the problem. “There’s no problem,” Smith said. “There never was any problem to begin with.”

Maybe not, but Smith was in no laughing mood after the game. He read an article in a Boston newspaper that said Fisk was correct in his remarks about the two high-priced outfielders. Smith finished reading the article, violently flung the paper across the clubhouse and stormed into the trainer’s room.

Fisk’s comments marked the second time in a little more than a year that Yastrzemski and Smith have been criticized by fellow teammates. Last year in New York, Billy Conigliaro blasted both outfielders, saying they were babied by management. Conigliaro was traded after the season, but the Red Sox were loaded with outfielders then. All-Star catchers are a little harder to find.