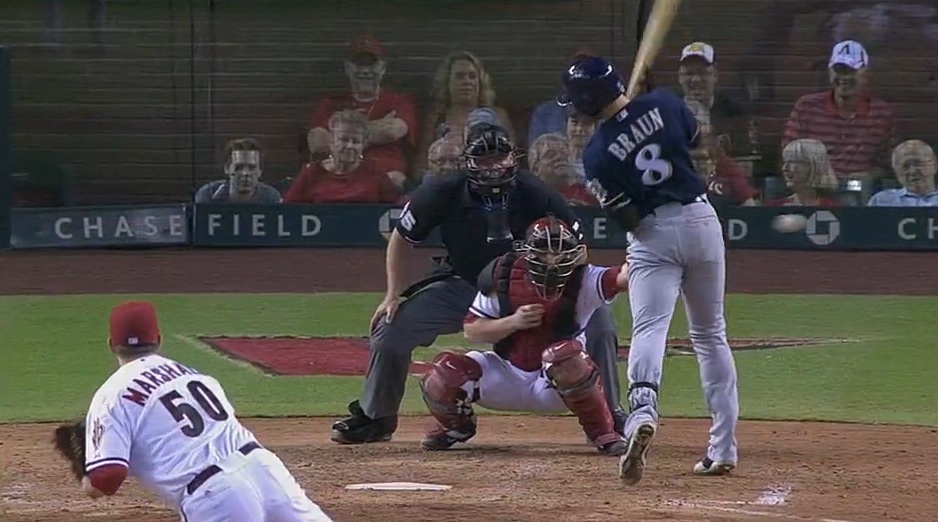 This is what it looks like when a plan doesn’t work out.

The Arizona Diamondbacks, angry with the Brewers for a variety of reasons, and with Ryan Braun for some very specific other reasons, finished a passel of business Tuesday in the span of two pitches. The first sailed behind Braun, the next drilled him in the backside.

Things grew heated in the sixth, when Milwaukee right-hander Kyle Lohse hit Chris Owings in the upper back, the ricocheting ball knocking his helmet off his head. It did not bear the marks of an intentional pitch; it was about the slowest fastball in Lohse’s arsenal during a close game, and the right-hander visibly blanched when the pitch made contact. (Watch it here.)

By itself, this may not have been enough to fully rile the D-Backs. But when, two batters later, Lohse threw a slider over the head of pitcher Mike Boslinger—who was trying to bunt Owings to second—Arizona took note. This pitch, too, was almost certainly unintentional. Why would anybody want to drill the pitcher in a two-run game? Much more likely, Lohse was trying to put a pitch in a difficult-to-bunt location. (In that, at least, he succeeded.) Add to that the fact that he grazed Didi Gregroius with a slider in the first inning, and manager Kirk Gibson’s mind was almost made up for him.

The very next inning, he had what he must have felt was a tailor-made situation. Not only were there runners on second and third with one out, leaving first base open, but the batter was Ryan Braun. The same Ryan Braun who Gibson was not at all shy about slagging last year, in response to the fact that the 2011 NL MVP led the Brewers to a taut playoff win over Arizona, and later admitted to have been juicing at the time.

“If I get a chance to see Braun, I got a question for him, right to his face,” said Gibson last year, in an Arizona Republic report. “Is he about rehearsed by now? About ready to come out? He’s probably been practicing at theater school somewhere. Anyway, she was looking at how things like that can influence people’s opportunities and the opportunity to do something like that.”

So: Pissed-at-the-present plus pissed-at-the-past apparently equals send-your-reliever-out-for-some-dirty-work. Arizona pitcher Evan Marshall sent a 94-mph fastball behind Braun’s back, drawing a warning from plate ump Ted Barrett. His next pitch was even faster, and connected with the small of Braun’s back. Barrett ejected him on the spot. Not so oddly, Gibson seemed delighted when Marshall returned to the dugout. (Watch it here.)

The plan, of course, backfired. Gibson strategized as best he could, using his statement to set up the double play in an instance when he would have been justified in ordering an intentional walk to do the same. But his team’s 4-3 lead turned into a 7-4 deficit when the next hitter, Jonathan Lucroy, touched reliever Brad Ziegler for a grand slam. (Watch it here.)

The Diamondbacks have talked a lot of late about the need to stick up for their own in ways just like this, and followed up in as overt a way as he could. That’s the thing about planning, though—without execution, it doesn’t amount to a whole hell of a lot.

The teams have two more games, today and Thursday, with which to continue sending messages. If Gibson’s astute, he’ll recognize not only that he took his best shot (two of them, in fact), and that it didn’t work out so well for him. His slate should be clean. If the Brewers are astute, they’ll recognize that Lucroy gave them the best response for which they could ever have hoped.

2 thoughts on “On the Impracticality of Hitting Opponents Out of Anger, Arizona Diamondbacks Edition”