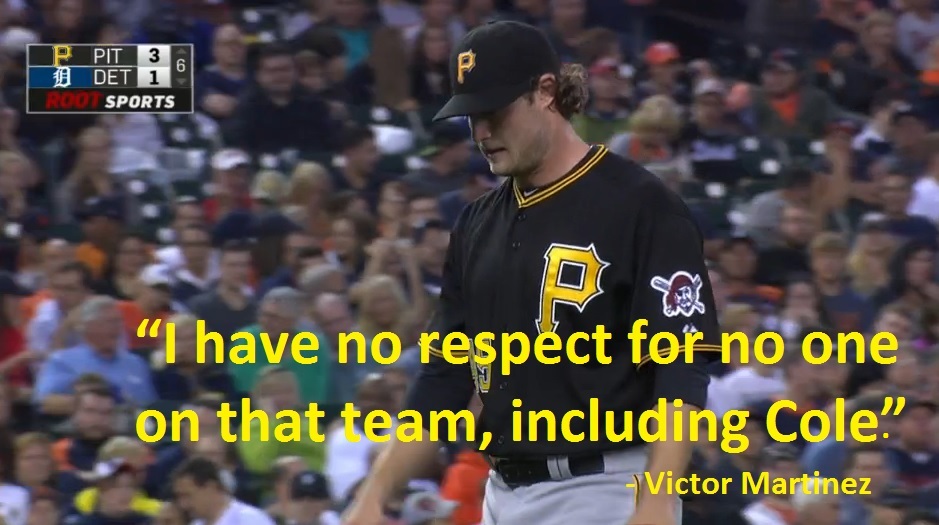 A measure of how far baseball has come—for better and worse—was on display Tuesday in Detroit. On one hand, the you-hit-my-guy-so-I’ll-hit-yours mentality so prevalent in past generations has become rare enough for modern occurrences to make a bit of a splash.

On the other hand, the instincts that players once used to automatically rationalize that kind of behavior have atrophied. Such tactics now lead to full-bore freakouts … or at least baseball’s version of them.

In the wake of one such tit-for-tat exchange with Pittsburgh on Tuesday, Detroit designated hitter Victor Martinez did the unthinkable in baseball circles—he publicly vented, going so far as to drop the “R”-word.

“I have no respect for no one on that team, including [Pirates pitcher Gerrit] Cole and their coaching staff,” he said in a Detroit Free Press account.

It started when Justin Verlander hit Starling Marte with a pitch in the fourth inning. It was clearly unintentional: a 1-2 count, a runner on first and the Tigers were losing, 3-0. Regardless, Cole—who has a history of paying attention to the Code—responded by drilling Martinez in the ribs during the very next frame.

This is what set the DH off.  “If they think that Verlander hit Marte with a 1-2 count—he was battling that at-bat—if they really think we did it on purpose, they’re playing the wrong sport,” he said.

Martinez is probably correct, even while overlooking the obvious point that Verlander’s intent likely didn’t matter. Cole appears to be a guy who embraces the old-school mentality of teammate protection, which is so outdated to have become cliché: You hit my guy so I’ll hit yours, and maybe you won’t take so many liberties with the inside corner next time. The fact that four Pirates players had been hit over the previous three games may well have factored into Cole’s decision to put his foot down.

This is not to say that Cole acted appropriately. But speaking personally as somebody who disagrees with the tactic of drilling an opponent simply to make a statement, I still have to appreciate a pitcher looking out for his guys.

Verlander himself responded by drilling the next batter he faced, Pedro Alvarez, on the thigh—at which point both dugouts were warned.

“I think in baseball there’s always been that, if someone deserves to be thrown at, I think a lot of times when it’s done the proper way it’s over after that,” Tigers manager Brad Ausmus said in the Free Press. “And it’s true. If it’s done the right way, both teams at the end say, all right, it’s over.”

Was it over? Various members of the Pirates clubhouse were dismissive of Martinez’s comments (“I wasn’t aware he was the voice of reason,” said Clint Hurdle in the Free Press), and the DH was drilled again yesterday, by reliever Jared Hughes, with an 89-mph fastball, in a situation that screamed for intent: The Pirates led 9-2 in the eighth inning, Martinez isn’t exactly Billy Hamilton on the basepathes and his role as a baserunner barely registered.

Today’s game went by cleanly until the ninth, when, with Pittsburgh leading 5-3 and first base open, Tigers reliever Bruce Rondon drilled Francisco Cervelli, who had opened the scoring with a fourth-inning homer. Martinez ended things by grounding out to first.

The rest of the story remains to be seen.