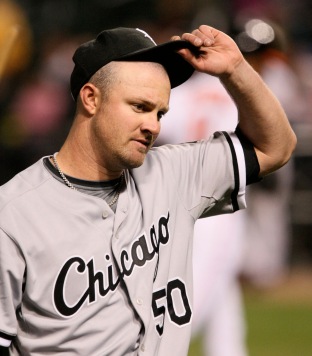 Early in spring training, Dioner Navarro told the lefthander that he’d been holding his glove in different positions during his delivery, depending upon whether he was throwing a fastball or a breaking ball, according to a report from CBS Chicago. Hitters noticed. “We fixed it,” Danks said, “and it has not been an issue since.”

Prior to this season, when Navarro was a member of the Rays, Cubs and Blue Jays, he was 11-for-26 against Danks, including three home runs. Seems like he’s noticed something in the southpaw’s delivery for a while.

Pitch-tipping, of course, is a fairly common occurrence. Should a player notice a hitch in a pitcher’s delivery, word quickly spreads around the league. Navarro was hardly the only hitter to benefit from Danks’ mistakes.

There’s a section on pitch-tipping in The Baseball Codes, which discusses a number of players who were forced to alter their delivery to better hide their intentions. A segment that was edited out of the final copy lends further detail to the phenomenon:

Hall of Fame spitballer Burleigh Grimes was done in by his cap. Although he shielded the ball with his glove to keep hitters from knowing whether or not he was preparing for a spitter, members of the Phillies realized that the brim of his hat—visible above the top of his glove—would rise when he opened his mouth to spit, and laid off the ensuing pitches. It worked beautifully, at least until the pitcher wised up and got a bigger cap.

Picking up tells can be a veritable art form, with master practitioners noticing things about a player that escape even their most astute. Bob Turley, for example, in addition to being a great sign thief, could also pick up tells better than almost anybody in the game.

“When (Connie Johnson) starts his windup, he’ll move his foot to the other end of the rubber if he’s going to throw his screwball,” he once told Mickey Mantle, as reported in Baseball Digest. “Billy Pierce always wore a long, heavy sweatshirt, no matter how hot it was. When he went into his glove to grip a fastball, you would see the back of his wrist. When he was going to throw a curve, he would get deeper in there and you would not see his wrist. Early Wynn, when he pitched from the stretch, where were his hands before he threw? If he was going to throw a knuckleball, they were at his belt. For a fastball, he’d come up under his chin. Slider, around his nose. Curve, up at his forehead. Jim Bunning altered his windup a little depending on what he was going to throw.”

Should Danks continues to improve, it’ll be nothing but good for the White Sox and his career. He’ll always have to ask himself, however, why nobody said anything to him sooner.