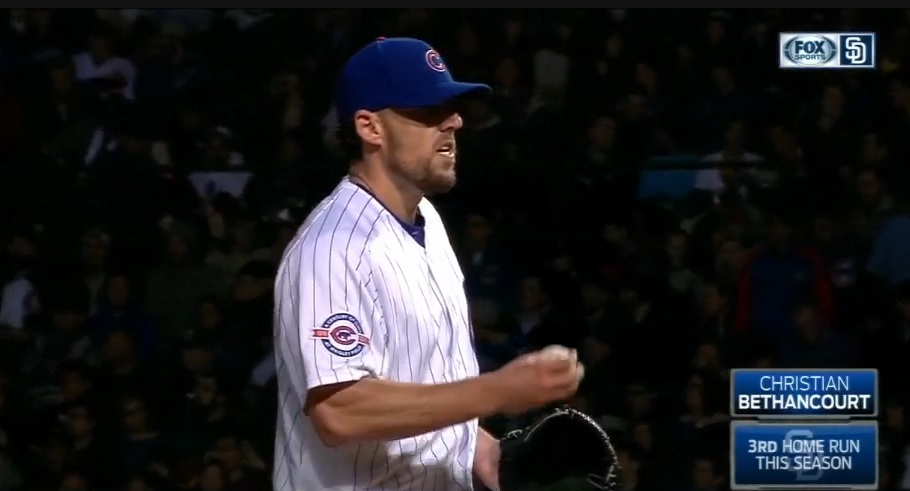 We’ve spent so much time recently with the concept of making baseball fun again that we seem to have lost sight of those old-school souls hell-bent on preserving on-field propriety and baseball decorum. (Members of the Goose Gossage Home for Aged Cranks, of course, carry with them their own brand of mania and are never far from view, but are rarely active players.)

On Wednesday, John Lackey reminded us that even to some who still play the game, the old school is still a thing.

In the second game of a doubleheader against San Diego, the Cubs starter gave up only one run, on a fifth-inning homer to Christian Bethancourt. It was enough to lose 1-0, but what really irked the right-hander was when Bethancourt stood in the box and watched the ball fly.

“You better fucking run!” Lackey screamed as the hitter rounded the bases.

That’s some good drama right there. Lackey upped the ante after the game, when he referenced the teams’ next meeting, in late August. “How many home runs does he have?” Lackey asked reporters, via the Chicago Tribune. Told that the blow against him was Bethancourt’s third of the season, the pitcher was concise. “I have a long memory,” he said. “He’ll learn.”

(See Bethancourt’s pimp and Lackey’s reaction over at Deadspin.)

Lackey, of course, is no stranger to this type of reaction, drilling Tampa Bay’s Matt Joyce for similar reasons, for example, when Lackey pitched for the Boston Red Sox in 2013. Also, Francisco Cervelli in 2011. Also, Derek Jeter (for different retaliatory purposes) in 2010.

Lackey is 37 years old and in his 14th big league season. He’s set in his ways. He’s also one of the rare guys left in the game willing to talk openly about drilling somebody for the crime of bruising his ego.

That kind of move is increasingly dubious in the modern baseball landscape, but Lackey is old and ornery. And, odious as it may be to the public at large, for guys like that, plunking upstart youngsters may well constitute their own version of making baseball fun again.