Today’s topic sits at the core of baseball’s unwritten rules, but amid the recent thunderstorm of bat flips and other erstwhile celebration it seems to have gotten a bit lost: Don’t run up the score on an opponent.

What this means in baseball terms is the cessation of aggressive play while holding a big lead late in a game. Players in such situations still try to get hits and score runs, of course—they just don’t take chances to do so. Mostly this means playing station-to-station, advancing only one base on a single, two on a double, etc. The rule also discourages things like stolen bases and sacrifices.

The pertinent question is less about whether one should do such a thing than when it should happen—what constitutes the definition of big lead and late?

The Baseball Codes offers a quick-hit array of opinions on the matter:

That list was first published in 2010, and already it seems so, so quaint.

Take, for example, yesterday’s Dodgers-Diamondbacks game. Los Angeles starter Kenta Maeda had given up only one hit through six as his team built an 8-0 lead, but with two on and nobody out, he did this: 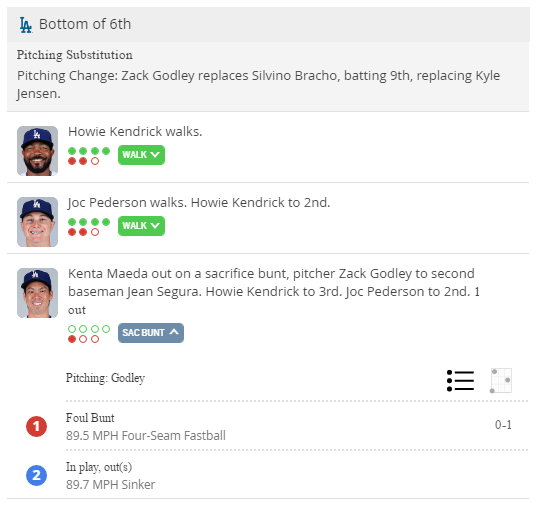 Additional details: The game was played in pitcher-friendly Dodger Stadium, limiting the big-comeback potential held by numerous bandboxes around the league. Dodgers starters had gone at least six innings in each of the previous two games, so their bullpen wasn’t particularly hurting. Maeda had thrown only 86 pitches. The lead seemed about as safe as a lead could be, yet there was Maeda, laying one down.

Was this kosher? My gut screamed “No!”—but I’m willing to admit that my gut is rooted in 1954 as far as these things go. It’s now okay to toss a bat for something so simple as a sacrifice fly, so perhaps it’s also okay to chase runs while up by eight and with every incidental factor leaning in your favor. Hell, Vin Scully said as much during the broadcast, and who am I to question the legend?

One thing that hasn’t changed is the question about how much is too much. Is eight runs now the limit? Ten? Twelve? In the sixth inning or the eighth?

Another thing that hasn’t changed is the diversity of opinion. I haven’t run any recent polls of big league managers, but it’s a fair certainty that there’s hardly unanimity on the subject. Even more certain is that, while four runs were once the limit, the current number is much, much higher. That is, if there even is an upper limit.

There must be a reason, after all, that this hasn’t been much of an issue recently. Bunt away, boys.

3 thoughts on “To Bunt or Not to Bunt: Is That Even a Question Anymore?”