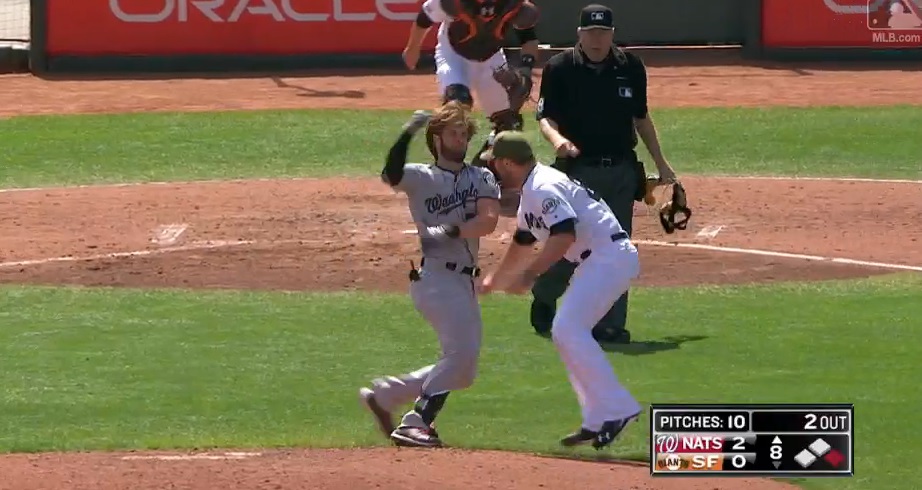 Harper-Strickland: The Day After played out in San Francisco yesterday, and was noteworthy primarily for just how un-noteworthy it had become. It became that way because the players made it so. Retaliation was nowhere to be found on the field Tuesday at AT&T Park.

In the visitors’ clubhouse before the game, Bryce Harper—fresh off receiving -an appeal-reduced three-game suspension—spoke about the hope that both sides could move on from worrying about the past, saying things like, “That’s gonna suck if I get hit again.”

Bryce Harper charges the mound after being hit by Hunter Strickland!!! pic.twitter.com/ahNpD6ogKV

On the Giants’ side, the conversation turned away from pitcher Hunter Strickland (himself suspended for six games) and toward somebody with significantly more effect on the team’s fortunes, a guy who through his own inaction managed to become a focal point of the story.

But Buster Posey didn’t want to talk about it.

His first comment to reporters was, “I just want to focus on playing the game.” Then he ended the interview.

With space to consider the implications, the more it seems that Posey’s actions were deliberate, not delinquent. If that’s so, the primary question becomes whether the catcher knew about Strickland’s intentions in advance, which leads to two primary scenarios:

In the aftermath of the fight Monday night, in the Giants’ postgame clubhouse, Posey sat facing his locker as Strickland approached from the side to talk to him. What they said was private, but Posey never once turned to look at his teammate. It did not lend an impression of understanding or warmth.

On Tuesday, Strickland tried to put it behind him, saying, “I never once questioned or had to question Buster or anyone on this team. We’re here to win ballgames and I don’t look at it any further than that.”

Discussing the fight itself, Harper expressed some relief that Giants players didn’t get to him more quickly, with particular appreciation for San Francisco first baseman Michael Morse, Harper’s teammate in Washington in 2012, Harper’s rookie year. “I’m thankful that Mikey Mo and [Jeff] Samardzija collided, because Samardzija saw blood a little bit, I thought,” he said

As for Morse, he said his intention, had he not collided with his teammate (resulting in a concussion that landed him on the 7-day DL), was to grab Harper and pull him the hell away from the pile. He likes the guy—went out of his way to protect him, not hurt him. How that sits with guys like Strickland or Samardzija, both of whom did see blood a little bit, is unknown.

Ultimately, focus on the situation grew so absurd that Harper even went so far as to suggest that baseball might be better off were players more emotionally in-tune. “If [Strickland] did have a problem,” he told reporters, “he could have talked to me during BP about it, said, hey, I don’t like the way you went about it.”

Then, realizing the folly of his suggestion, he sighed, “That’s not human nature, I guess.”

Let’s leave the last word, though, to Posey, with a sentiment that was, literally, his last word before shooing the gathered media away from his locker before Tuesday’s game. “Funny world we live in, isn’t it?” he said.