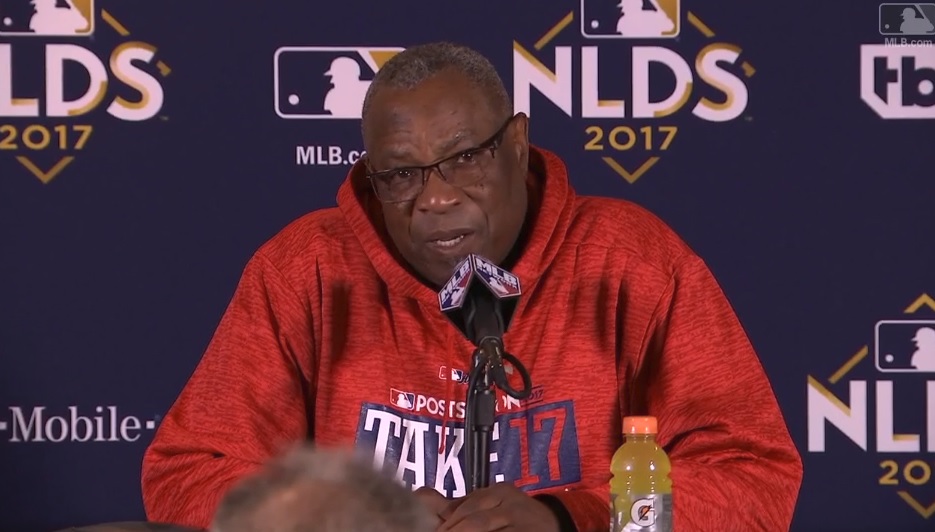 For a while there, it appeared that Tanner Roark would start the make-or-break NLDS Game 4 for the Washington Nationals instead of Stephen Strasburg. This struck most people as odd because while both were fully rested, Strasburg is an excellent pitcher, Roark somewhat less so. Up until a couple hours before game time, though, the Nationals said that Roark would get the call. We’re still not totally sure why.

At first, Washington manager Dusty Baker attributed it to Strasburg having thrown a full bullpen session on Tuesday, leaving him too depleted to make the start. Then we found out that the right-hander had actually thrown on Monday.

Baker mentioned something about mold in the team hotel. He hinted at Strasburg (and other players, maybe) being under the weather. What he didn’t say, but USA Today’s Bob Nightengale did, was that the pitcher had effectively removed himself from the rotation:

The Nationals were all set to pitch him Wednesday in Game 4 at 4:08 p.m. ET (TBS) at Wrigley Field, trailing 2-1 to the Chicago Cubs, only for Strasburg to decline.

He told them he’s under the weather.

He informed the Nationals’ staff that he ran a half-mile Tuesday afternoon, was wheezing during his run and simply isn’t prepared to start Wednesday, even though he’d be on regular rest, according to a person with direct knowledge of the Nationals’ pitching plans.

This is not a story about whether Strasburg’s decision was appropriate, or what ultimately led him to reconsider. It is a story about the steps major league managers take to shield their players from unnecessary—and often unflattering—attention. It is the reason that Baker has long been known as a “player’s manager,” someone able to get maximum production out of guys who adore him. For any faults in Baker’s managerial accumen, this is an undeniable strength.

It is not difficult to see what the opposite approach can bring. For an example, look toward the second-to-last day of the 2004 season, with Oakland needing to win two straight against the Angels to force a divisional tie. Barry Zito pitched exceedingly well for the A’s, giving up three hits and two walks over seven innings, at which point Oakland held a 4-2 lead. Then manager Ken Macha pulled him, the bullpen imploded, and the A’s lost, 5-4, missing the playoffs for the first time in five years.

One problem for Zito was that after the game, Macha told reporters that Zito could have pitched the eighth if he wanted to. The left-hander—who’d thrown 114 pitches and was suffering from cramping in his legs—had decided that the team’s fortunes would be better off with its bullpen, and asked out. Macha let everyone know.

Asked about the revelation in the postgame clubhouse, Zito was dismayed. “Obviously, I’m the ass around here,” he told reporters. He waited until Macha was fired two years later, however, to truly unburden himself, telling the San Francisco Chronicle that “I felt like [Macha] didn’t protect me.”

Zito was hardly alone. With the manager gone, players up and down the roster began to chime in. Earlier in the season, Macha had described the absence of outfielder Mark Kotsay—who had battled a back injury all season long—in a game against Tampa Bay as “puzzling.” Two days earlier, Kotsay said he’d needed to duct-tape himself together to simply show up to the ballpark.

“I felt disrespected,” Kotsay said upon Macha’s dismissal. “The ‘puzzling’ comment really threw me. My manager didn’t have my back, and every manager’s first business is to protect his players. That totally lost my trust in that relationship, between us as player and manager.”

This is a lot of calories burned by players on a guy who no longer had any influence over them. It shows just how deeply such actions can cut.

Another example can be found from the 1966 season, when Astros second baseman Ron Brand took the fall after rookie shortstop Sonny Jackson mishandled the feed on a potential double-play against Pittsburgh, enabling a rally that eventually cost Houston the game. It was a calculated move on Brand’s part, protecting his young teammate from criticism. That very day, the Astros acquired aging infielder Gene Freese, batting .208, from the White Sox. When Houston began its next series against the Mets, Brand was shocked to see Freese’s name in the starting lineup in place of his own. Freese hadn’t played second base regularly in a decade. Brand figured it had something to do with the error.

Speaking to manager Grady Hatton about it, he addressed the issue directly, asking whether Hatton thought the play was his fault. “No,” said the manager, “I know what happened. But I can’t leave myself open to criticism by playing a catcher at second base.” (Brand’s primary position was catcher, but he had been signed as a shortstop and had fielded well as a fill-in second baseman.)

“He threw me under the bus, is what he did,” said Brand, still rankled years later.

In 2006, Chicago White Sox manager Ozzie Guillen—perhaps feeling a bit invincible after winning the World Series the previous season—actually boasted about his ability to publicly roast his players. A feature in Playboy introduced him with the following sentiment:

Guillen proudly claims he “’leads the league in throwing players under the bus.” Last season he suggested White Sox pitcher Damaso Marte was faking an injury, blamed veteran hitter Frank Thomas for contributing to the team’s prior bad attitude and called former White Sox player Magglio Ordonez a piece of shit. During a September losing streak, Guillen told the press, “We flat-out stink.”

Guillen did not hold back on his rationale. “My pitcher, Mark Buehrle, said in the press last season that the Texas Rangers were using light signals to cheat,” he said. “When they asked me about it, I said the way Buehrle was throwing, Texas didn’t need to cheat. He was throwing shit. The next day, Brandon McCarthy threw an eight-inning shutout for us. If I had protected Buehrle, people would have wondered what the fuck I was talking about. So I throw my players under the bus because I don’t want them to have an excuse for anything. If you’re horseshit, you’re horseshit. If you’re good, you’re good. Don’t make yourself look like an idiot.”

That season, White Sox players drove over a t-shirt, leaving tire treads, wrote “Under the bus” on it, and presented it to the manager.

On the other hand, managers who do the opposite, like Baker, are enduringly appreciated. Protection covers on-field miscues, hangover- or STD-induced absences, and any other manner of impropriety. It has nothing to do with internal discipline, which can be meted out in any way the manager sees fit—only the public perception about what’s actually happening.

One guy who came around entirely was Hall of Fame manager Dick Williams. In Williams’ first gig, with the Red Sox in the late 1960s, his success was undeniable, but his style was so grating that he was fired midway into the 1969 season despite having recently led Boston to its first World Series in 21 years, and second since Babe Ruth was sold to the Yankees.

Among the clubhouse complaints was Williams’ habit of conducting postgame interviews nearby the locker of whichever player may have made an error in that night’s game, and, in the words of pitcher Bill Lee, “pointing out how horseshit he was.” It was an expedient way to lose support among the ranks.

By the time Williams got his next job, in Oakland, he was just as hard-edged—he went off on players all the time—but he had learned to do it in private. Not only that, but the manager went out of his way to protect his players from the press. A prime example came during the 1972 World Series, when first baseman Mike Epstein accosted Williams on a team flight about having been removed for a defensive replacement late in Game 2. It was an alcohol-fueled, profanity-laden tirade, unleashed in full view of the reporters who traveled with the team. Williams, in no mood, shouted right back. By morning, details were being reported across the country, and Williams did what he had to do. From Dynastic, Bombastic, Fantastic:

The following day the manager, eyes firmly on the Reds, walked back his previous sentiments. “I can’t blame a ballplayer for feeling bad about coming out,” he told the press, confirming that Epstein would be in the starting lineup for Game 3, again batting cleanup. “If he feels bad about coming out, that shows that he wants to play. And don’t forget, I had five or six scotches at the time.” It was Williams at his best. He needed Epstein’s focus in Game 3; sacrificing himself on a public pyre was a small price to pay for it.”

Seven days later, the A’s won the World Series, and went on to win the next two as well. Ultimately, Williams’s reaction is the kind of thing that leads to winning baseball.

There’s a reason Baker is a three-time manager of the year.

2 thoughts on “On Managers Protecting Their Players: Strasburg Saga Shows Baker Going to Bat for his Boys”